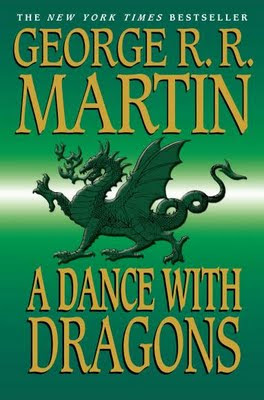 I've always felt that a lot of movies and books lack realism, that when the hero survives and gets the girl, while the villains get their rightful punishment the whole story becomes null and void. Therefore I believed that the opposite of this - a character centric plot, a realistic story, unexpected outcomes - would spell a good story and wonderful books/movies. Such is the tale in A Song of Ice and Fire, the seven (until now) book saga that I am currently reading, in which A Dance with Dragons is the fifth book.

Imagine my surprise in discovering that the other extreme is just as bad. In ASOIAF, there is no real main character. A lot of heroes and villains to choose from, but, completely unexpected, heroes suffer and die, while villain prevail. Maybe it's the other way around. Maybe nobody truly prevails. Certainly they all suffer. So what is wrong with this picture? George R. R. Martin went too far. His tale is now more of an alternative history than a true story. Maybe the sixth book will be different, but how can it be and still remain faithful to the first five? How can it continue the way the story went so far without a pointless struggle, where random things happen to random people? I mean, if I like this, I should start reading history books. My father would be pleased, I am sure :)

A Dance with Dragons takes place in a period in time that mostly overlaps the fourth book. The author acknowledged that there were too many characters doing too much in that short amount of time and, rather than split the storyline in the middle and create the "left hanging" effect, he opted for a geographical (more or less) division of the plot.

I liked the book. It started with a lot of setup, and that is what most of the book is about, but it also got deeper into magic and Arya's assassin training and what Jon and Tyrion did. I would say they are my favourite characters so, in that respect, the fifth book is better than the fourth. Can't say more about it without ruining the fun, but I was not disappointed, only slightly annoyed to see that what I really wanted in a book I got and I was still not completely satisfied.

My theory is that the stern characters in the book represent Martin's own father, while Tyrion and Jon are reflections of his own persona. Sansa may be the clueless girl who broke his heart, while Arya would be his daughter or younger sibling. I am just theorizing here, as I have not read any bio information of the author. Perhaps he represented himself as Wun Wun :)

<p>This story takes place on the same timeline as Feast of Crows. You're seeing the same story from different perspectives that were missing in Feast. It will set up details that you may not have known before and will be important for the future.</p>