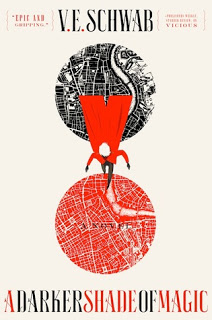 The idea is nice: multiple versions of the same city of London, somehow named the same, even when the countries and the languages and the magic is different from world to world. Then there is the magician who can go between worlds and the charismatic female thief who accidentally steals from him exactly in the moment of a great change in the structure of power between these worlds.

While I liked the idea and even enjoyed the characters, I felt like Victoria Schwab was more in love with the story than with the characters. Barely sketched, they do things because they do things, not because of an inner drive that makes a lot of sense for them. Even the villains are standard psychopaths doing bad things because they like doing bad things. Plus they kind of suck. I liked A Darker Shade of Magic, I think I may read the rest of the series, but I barely managed to feel anything for the characters. Whenever something needed to happen, some prop or person appeared right then and there. Everybody had stunted emotions that only seemed to push people to action when the plot required it, rather than as a natural consequence of feeling something and plot holes were a plenty.

The bottom line is that I can't recommend this book to anyone, even if I enjoyed reading it.