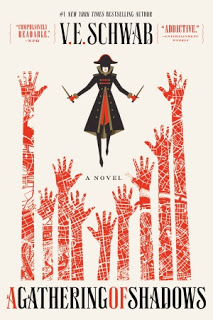 I liked A Gathering of Shadows more than the first book in the series, A Darker Shade of Magic. It felt more grounded, more meaty. A large part of the book is split into two parts as Kell and Lila walk their separate paths only to collide in the middle and be tragically broken apart towards the end. There are more characters, more world building.

Not all is rosy, though. There are still huge swaths of pointless exposition, followed by truncated bits of action. In this book, a part of the focus is on a magical tournament that all characters are somehow involved with, so a big part of the story you wait to see what is going to happen when wizards fight each other. And then there are the scenes of battle which are either a few paragraphs long or simply summarized because Victoria Schwab didn't really care for the characters fighting or because she wanted to focus on a (bloody hell, I am so tired of this cliché!) love triangle. I also wish Lila would have had a more interesting arc, other than going to sea for 4 months and returning a world class magician without an actual event to drive her evolution. It's basically a "she read some books, watched some YouTube tutorials and she was smart" story.

I found it funny that this book ends in a gigantic cliffhanger. So large, in fact, that in the acknowledgements at the end the author apologizes. She managed to write four books that didn't end in cliffhangers, so she is allowed this one, she reasons. Is this an emotional need for writers, to hang their readers? Something so powerful that they just have to do it from time to time in order to feel alive? Kind of like magic, eh? :)

Anyway, I am happy to say that I will probably read the next book in the series and not only because of the cliffhanger, but because I am actually interested in what the characters will do. I have other things on my plate first, though.