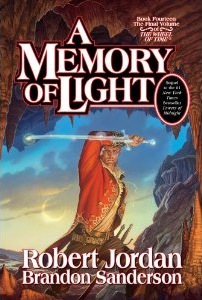 Finally, it is all over! The Dark One is defeated and all the character stories have come to an end. Funny enough, having Brandon Sanderson write the last two books made me want to read more. You may have noticed that in the title I give no credit to Robert Jordan; I know it's his story and that he left a lot of notes on how the book would continue before he died, but Sanderson has made it a lot better and it feels a waste to end it just when it got good.

The last book of the Wheel of Time saga, A Memory of Light, continues where Towers of Midnight left off, pits everyone against everyone and ends all threads. The battle of the end is epic and, except some slight miscalculations, is pretty much consistent with the other books. No Nynaeve braid pulling or needless spanking or otherwise humiliating women in this one, instead a lot of characters blooming from the dried up husks that they were becoming in the last Jordan books. As before, I loved Mat's character, but also Perrin is now a lot more involved, intrigues abound, people die (even important ones) and the ending is... let us say intriguing. One may still hope some offshoots of the story. There were some unexplained or otherwise inconclusive bits. For example there is a scene where Mat sends a lot of villagers to die protecting a river, then, when it matters most, the same villagers return through a gateway. I have no idea what that was about. Also there was a little bit of a story with some soldiers that had all their metal turned to something squishy. It just went and gone without much continuation. Then some ideas of the battle seem brilliant at the end of it, but not used during it, making the entire "Mat's strategical genius" idea a bit flimsy. Also, Demandred almost kicked his ass (and a lot of others as well) before he got killed. If there is something that felt a bit off, it was the women. Robert Jordan was obsessed with the women and he often wrote the story from their point of view. Sanderson is clearly a man's man :) Women had pretty small roles and little introspection.

Bottom line: a fourteen book saga is a lot to read. As much it pains me that it is over, it makes me even more glad that it is over. Sometime you just have to learn to let it go. The quality of the writing is very good and I dare say that this is probably the best book of them all, which makes it a fitting finale. It is also very long, the third in length from the entire series, at approximately 360000 words. If you have read The Wheel of Time so far, there is absolutely no reason to not read the last book. If you haven't started to read the series, you might want to think it over if you want to spend so much time doing it, but I don't think you will regret it. And lastly, if you have started to read it and then abandoned it for whatever reason, the last two books are a level higher than the rest of them and should provide motivation to carry on.

Oh, and you if you wonder if I am going to read the prequel and the companion books: no, I won't! If you do, though, please make the effort to comment on one of the Wheel of Time posts. Thank you!