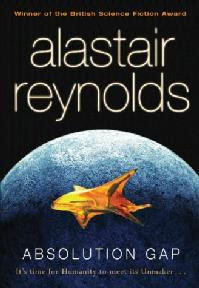 The fourth book by Alastair Reynolds that I've read recently, also set in the Revelation Space world, Absolution Gap follows the adventures of the ship Nostalgia for Infinity as it flees the "culling" of the Delta Pavonis star system by the swarm like machines called the Inhibitors. There is no purpose in reading the book without the others, as the story starts where it had left and continues to a more or less open ending.

This felt like the best book so far, however the enjoyment that I got from it had its very brutal ups and downs. While the beginning starts with full force and made me want to not let go of the book until I finish it, there was a side story that seemed not to have any connection with the main arc. When they finally met, they left me with that "What the fuck?" feeling. The ending was a jiggly up and down ranging from very cool and completely dumb. Not that the writing style faltered, but the behaviour of some of the characters really annoyed the crap out of me.

I would have to say that the ending was the most anticlimactic of all the books in the series, but the book is definitely the best yet.