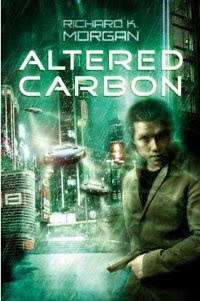 The title of Altered Carbon refers to flesh, human flesh in particular. Richard Morgan describes a world in which people record their experiences while they live, then get transferred to other bodies when their own die or if they need to go to another planet or if they are rich enough to want a different experience or alternate bodies just for the sake of it. The alteration of the normal relationship between consciousness and physical existence is the backdrop of the book.

The good part about this cyberpunkish story is that it is personal enough and simple enough to read in one gulp. I did that, always wondering what was going to happen next and excited enough to not get distracted by something else. The bad part is that most of the props are used only to further the story and are never explored in depth. The way people are always so easily "re-sleeved" into another body and yet almost never walk with different bodies at the same time, the way "Meths" - rich people that are practically immortal, having cloned bodies waiting in case anything happens - have all this influence, but in the end fear laws and have a conscience and human failings, just as if they didn't live for centuries, and so on. I could have gotten over that more easily if all these rules would not have been waived aside whenever the main character needed them waived.

The plot is that of a detective story set in the future. A former Envoy - soldiers trained to easily switch bodies and move from planet to planet to preserve The Protectorate - is sleeved back on Earth to investigate the suspicious body-death of a rich and influential man - a Meth. During this mission, he lives dangerously, gets people to try to kill or manipulate him, women to fall for him - quite a lot actually - and in the end solves it all. So in a way, it's an interstellar James Bond.

Some of the elements in the story are haphazardly thrown around and never explained or having any connection to the main plot, like an apparent discovery of Martians, also an interstellar civilization, long gone for reasons unknown and remembered through racial memory only by whales. It was a silly proposition and pointlessly left in the book, but for me it served to show that the writer is not perfect and, even if his first book is not perfect either, it still was a nice enough read for me to do it in one swoop. Morgan has written another two books with the same character, Takeshi Kovacs, and in the other two the Martian motif is truly explored. I may end up reading them.

In conclusion, Altered Carbon is more pulp fiction than cyberpunk, with a strong backbone of detective story with a moral and a thin body of future world, disruptive technology and exploratory writing. Even if it felt naive at times, it was a pleasant read and I don't regret wasting a Saturday finishing it.