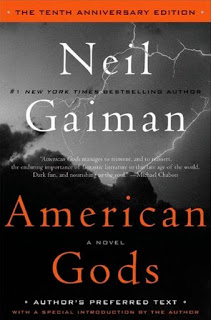 Another really nice book I am glad I readlistened to. In 2001 Neil Gaiman published this book, American Gods, and then,ten years later, a special tenth anniversary edition, with the "author's preferred text" and including an additional 12,000 words, was published by William Morrow in June 2011. Both versions of the book were adapted to audiobooks, the first just narrated, the second with a full (and talented) cast. This second version I listened to, on YouTube no less. Long story short, I liked the book a lot, even if it was a bit too long winding.

The story is not only interesting in concept - gods being created and fed by people's beliefs, then being forgotten and dying as belief wanes, but also in its many details borrowed from the world's superstitions and religions. We start with a man in prison, a calm, cerebral man, but also big and muscular. He is about to be freed from prison and return to his wife and his best friend to start his life anew. From then he is just thrown into this crazy world of supernatural beings, but not like all these lazy TV shows where there are vampires and werewolves at war, but slowly and subtly. Gods are at the same time what we remember them to be: big spiders, thunderbirds, gods of war, but also men and women that can be killed. They can be pitiful beings, old creatures that resent the newness of the world and of its people. I also liked that there was not a lot of the major religions, just a few hints at the end. No Christian or Muslim stuff, I mean. At the end of the audio book there is an appendix, Shadow meeting Jesus, that the author wrote but decided to keep out of the book because it didn't feel like it was part of it. I agree with him.

There is also a kind of Lord of the Rings ending to the book. Even if the main story arches ended, there are still several chapters after that. I could have lived without them, I guess. This verbosity is also the problem with the book. Laden with details and side stories and keeping the pace slow can be slightly boring. I never read the version published in 2001, but it was shorter, which was probably for the better. I liked that Gaiman left a lot of hints in his writing and even I was able to see through them. That was maybe another reason why the pace felt too slow, since I've glimpsed a little of the whole story and then just waited for it to reach that point. However, that is the exact reaction of the protagonist, when he figures stuff out. He feels like he already knew, but refused to actually bring it into consciousness.

The adaptation of the book was top notch, the protagonist, but more than this the man called Wednesday, were interpreted by talented actors and I found myself drawn into the story like a man slowly being pulled down in quicksand. Give it a try.

It was announced by Starz in July 2014 that they are preparing an adaptation of the book into a TV series. Also, while there are other Gaiman books and stories in the same universe (like Anansi Boys, from 2005, which some call American Gods #2), the author announced he is working on a direct sequel of the book only in 2011.