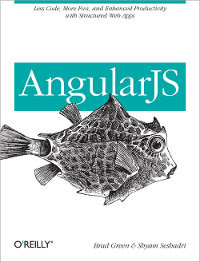 I have been hearing about the AngularJS library for a few months now, people often praising it as the new paradigm of web development. It is basically a JavaScript MVC framework that makes heavy use of markup language in order to declare the desired behaviour. Invented at Google by Miško Hevery, it uses cacheable templates, databinding and dependency injection to combine the various components that otherwise are independent and testable. It also comes with its own testing framework (unit and end-to-end) and a way to describe unit tests Jasmine (BDD)style.

So I started reading about this new framework in the book intuitively called AngularJS, written by Brad Green and Shyam Seshadri. They start with an anecdote, discussing how they were working on a web application at Google. They have already written 17000 lines of code in about 6 months and it was almost finished, albeit with great frustration related to development speed and testability. This guy, Miško Hevery, tells everyone that by using a framework that he wrote in his spare time (you gotta love devs!) they could rewrite the whole application in two weeks. He was wrong, they did it in three weeks and at the end the whole thing has only 1500 lines of code and was fully testable. This was a great beginning for the book, as it starts with a promise and then (sorry, couldn't help the pun - you will see what I mean if you read the book or know AngularJS already) it describes how to achieve your goals. The book itself is not large, about 160 PDF pages, and can be used as both a primer and a reference. It describes the basic concepts of AngularJS and how they can be put to work, with some small app examples at the end. Of course, you have a link to where to download all their code samples.

What do I think about the book? It was pretty good. It shows the authors' preference towards Linux setups, but it is not annoying. Each chapter is clear and to the point. The framework itself, though, is original enough that after a few chapters it is almost impossible to understand everything without tinkering with the code yourself. Unfortunately I didn't have the time and disposition to do that, so just because I've read the book doesn't mean I know how to work with Angular, but I am confident that when I will actually start working with it, it will all come together in my mind. Also, as I was saying, the book can easily be used as a reference. It is not a complete overview, not every AngularJS feature and gotcha can be found in its pages, but it's good enough.

What do I think about the framework? It seems pretty spectacular. My only experience with JavaScript MVC frameworks is from a short brush off with BackboneJS. At a time I thought I would be working with it a lot and was boasting here that interesting posts would appear. Alas, it was not to be. Sorry about that, maybe better luck with Angular. Backbone was pretty interesting, but it had a horrendous way of working with data models and it was very easy to break something and not realize where it came from. There seems to be a lot more thought put into Angular. An interesting point is that the writers advertise TDD as a way of actually working and claim they do so themselves. I have seen many people trying and giving up, but I have hopes for JavaScript. You don't need to compile things, you don't need complicated servers or time consuming deployment steps: just change stuff and run the tests and/or refresh a page. I like the fact that the creators of AngularJS put this much work into making everything testable.

So go ahead: read the book and try the framework!

Update 24 Aug 2013: I've started reading dev blogs again and I've stumbled upon a 70 minute video by Dan Wahlin presenting AngularJS. His explanations seemed a lot more down to Earth than those in the book so I felt that his video really complements rather well what is written there. Here it is: