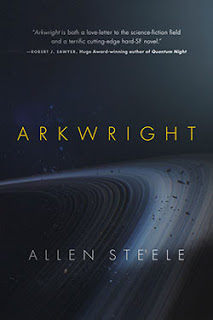 Inspired by the writings of classics like Asimov, Heinlein and Clarke, Arkwright is a short book that spans several centuries of space exploration and colonization, so after a very positive review on Io9, I've decided to read it. My conclusion: a reedited collection of poorly written shorts stories, it is optimistic and nostalgic enough to be read without effort, but it doesn't really teach anything. Like many of the works it was inspired from, it feels anachronistic, yet it was published in 2016, which makes me wonder why did anyone review this so positively. Perhaps if reviews would not word things so bombastically: "sweeping epic", "hard science fiction", etc. I would enjoy books that are clearly not so more.

Long story short, is starts with a group of 1939 science fiction writers, one of which eventually has a huge success. On his dying bed, he leaves his entire fortune to a foundation with the purpose to invest and support space colonization, in particular other star systems. Somehow, this seed money manages to successfully fund the construction of a beam sail starship which ends up putting people on another star's planet. Most of the book is the story of the family descendants who "live the dream" by monitoring the long journey of the automated ship.

First of all, I didn't enjoy the writing style. Episodic and descriptive, it felt more appropriate for a history book or a diary than a science fiction novel. Then the biases of the writer are more than made evident when he belittles antiscience protesters and religious colonists that believe in the starship as their god. It's not that I don't agree with him, but it was written so condescendingly that it bothered me. Same with the "I told you so" part with the asteroid on collision course with Earth. Same when the Arkwright descendants are pretty much strongarmed into getting into the family business. And third, while focusing on the Arkwright clan, the book completely ignored the rest of the world. While explaining how they designed and constructed and monitored a starship for generations, the author ignored any scientific breakthroughs that happened during that time. It is like the only people that cared about science and space expansion were the Arkwrights. It made the book feel very provincial. I would have preferred to see them in a global context, rather than read about their family issues.

I liked the sentiment, though. The idea that if you put your mind to something, you can do it. Of course, ignoring economic, technical and probabilistic realities does help when you write the book, but still. The story is centered on an old science fiction writer who takes humanity to another star, clearly something the author would have liked to have been autobiographical. It felt like one of those stories grandpas tell their children, all moral and wise, yet totally boring. It's not that they don't mean well and that the moral isn't good, but the way they tell it makes it unappetizing to small children. If I had to use one word to describe this book it is unappetizing

Funny thing is that I've read a similar centuries spanning book about the evolution of mankind that I liked a lot more and was much better written. I would suggest you don't read Arkwright and instead try Accelerando, by Charles Stross.