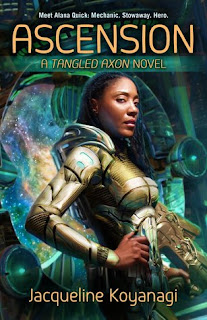 If you want a book about women feeling stuff and constantly interrupting each other whenever they are about to communicate anything relevant while acting like space pirates in a desolate corporate universe, but doing nothing particularly consequential, Ascension is the book for you.

It is the distant future: space is called The Big Quiet, the universe has turned into a cosmic version of bankrupt Detroit because of the infusion of magic tech coming from a different universe (well, it's baryonic matter infused with human will, but yeah... magic) and all major characters are women and most of them are lesbian. About what you would expect from Jacqueline "(J)" Koyanagi, who describes herself via marketing as "writes science fiction and fantasy featuring women of color who love other women, disabled characters, neuroatypical characters, and diverse relationship styles.".

The main character is a female engineer (ugh, space surgeon) that falls in love with a peg leg female captain of a starship (that she also falls in love with) while being pursued by the authorities for something they didn't do. The physical attraction between the two girls is so strong that events like death of her family or genocide are just pushed in the background.

I guess we need books like these to realize how someone might act annoyed with books that only contain straight male characters, but other than that this is just low quality space pulp. And this trend is taken to a point so extreme that in the whole book there are only three males: a man who is part wolf, full of muscle, brooding silence and the occasional snarl, a security guard who is incapacitated before acting and the husband in a random family who's first act is to isolate and attack the protagonist before also being quickly disabled. I pity women who see males like this.

Bottom line: I read it all just to see if behind all the agenda bullshit there was anything interesting related to story or characterization or world building. But no.