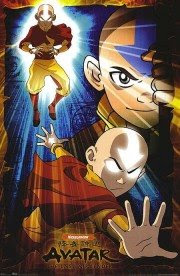 Avatar is one of those animation series that you read about and think they're crap. I mean, first of all they are not Japanese :), they are actually US. And then they are shown on Nickelodeon and then they are about and for kids. I must be honest when I tell you that I accidentally heard about the series and I had no great hopes for it. However, as it turned out, it is a great show, one to be watched and enjoyed.

The show is mostly inspired from Chinese mythology, with Western and Indian bits thrown in when required. The world is separated into four nations. The people of each nation can control in various degrees a specific element magic: air, water, earth or fire. Unlike say, Naruto, there are no people that can control or mix more than one magic type, except a special and unique person, the Avatar. The Avatar has the job of protecting the world and, if killed, reincarnates into another person. The last Avatar, though, dissapeared a century before the show starts and no one has heard of him or any of its reincarnations. Meanwhile, the evil Fire Lord has started a war to conquer the world and he is about to succeed.

Well, you can see where this is going, right? The Avatar comes back, he is a goofy kid, and in the end he saves the world together with his friends. However, the animation, the stories and the teachings in this show are all high value and, for once, something a kid can see, enjoy, understand and USE in the real world. Well, all except the magic part :)

What is also great about the series is that it is not a work in progress. It did not end because the ratings went down or the economic crisis hit or whatever and it has very few filler episodes. It was a long consistent script that span three seasons of 20 episodes each and then ended with no significant loose ends.

In other words, this is one of those rare American shows that can rival the best Japanese anime series. Even my wife enjoyed watching it (well, most of the time).

<p>Well, thanks, although I feel that your comment is borderline spam. Hint: stop calling people "dear" if you want them to think you are European ;)</p>