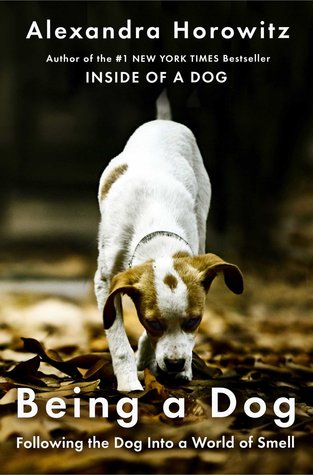 I found Being a Dog a bit misleading, as it is not so much about dogs as it is about smell in general. However, as a book about smell it's a concise and very interesting book. Alexandra Horowitz has a steady professional writing style and the information in the book is being related as anecdotes from her very thorough research.

From the very start the book acknowledges that dogs are not visual and auditory like humans are; instead their main sensory organ is their nose. As the author explores the world of smells, we understand more about us, dogs and how we sense the world in general. I liked many sections of Being a Dog, but I found the first part as most interesting. Mainly because it is about dogs :) There we find that the structure of the nose of dogs is as much responsible for their great sense of smell as is the immense number of sensory cells and dedicated brain neurons. Horowitz explains that dogs do not pass the so called "mirror test", but that is because they are not visual. If the experiment is constructed so that the mirror is olfactory, then they easily pass the test. It also tells us where the smelly glands on the dog are, including its paws. And indeed, I smelled my dog's paw and it was concentrated and nice. If you have a dog, smell their paws now!

That doesn't mean that the part about human smell was not captivating. I found myself smell things on the subway - that is a good thing - just because I felt inspired by what the author described. In conclusion, I recommend the book. It's a light read and it is the kind of work that makes us aware of a part of the world that is both near and ignored.