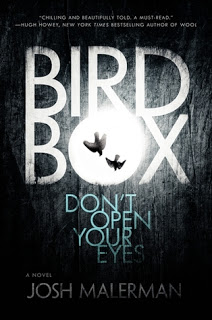 I didn't like Bird Box. Josh Malerman seems to be a good writer, but the way he chose a cliché as the main character just in order to skirt the explanation of what happened and avoid any actual attempts of problem solving annoyed the hell out of me.

Imagine a world that is suddenly invaded by something, nobody knows what, but just one glimpse of it would make anyone (including animals) intensely suicidal. The main character is a young woman, left pregnant by some guy she randomly met, who has to deal with this new situation. Whenever the character gets too close to actually thinking about a solution or talking to someone who could find one, she gets all emotional because... children. This is such an ugly and demeaning trope.

The action is not that intense either. Imagine some people worrying day and night because they can't open their eyes. Yes, you can't drive! The horror! In several years covered by the out of sequence chapters no one actually attempts to function as a blind person would. The author just dismisses the possibility that true life without eyes makes sense. Everyone is stumbling (blindly) and relying on their hearing by shouting "is anyone there? go away!". Unless this is a metaphor for US foreign policy stupidity, these ideas fell on deaf ears with me. Deaf, get it?

Anyway, there is a Netflix movie made after this book, I have no idea why. It is could be better than the book, but that isn't a high standard.