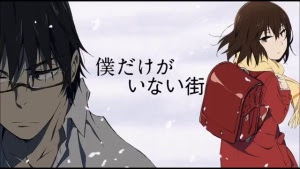 Literally translating to "The town where only I am missing", Boku dake ga Inai Machi presents (what else?) a manga artist with no life or future who finds out he can transfer his consciousness in the past, fixing things that went wrong. Of course, the worse thing that ever happened to him was living through a killer's series of murders of some of his school classmates. Another traumatic experience makes him, now 29 years old, transfer his consciousness in the past, during his childhood years, and determined to find and stop the killer.

Now, this might not seem particularly captivating, only the solution for saving the children is not to investigate clues or stake out locations or alert adults, but using the tools a mere child has: making friends, being around the lonely people the killer seems to target. This has an impact on the man's life, but also on that of the people around. In the end, it's a call to end self alienation by connecting and doing good things to people close to you. The title is a metaphor to the impact a person has on their environment. What if you never were? Would things change? The English title - Erased - is the one licensed for the US market and has little to do with the plot.

The anime is nicely drawn, if not spectacular, the Japanisms are pretty common, the story is sort of predictable, so the only true positive thing about the show is the mood and moral. I can't recommend it to everybody, but I personally enjoyed it. It has just 12 episodes and so it's like 4 hours in total. Here is a trailer: