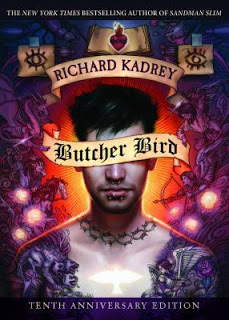 I think Richard Kadrey didn't know exactly what he wanted with this book when he started it. The full title is Butcher Bird: A Novel of the Dominion, but it's his only book related to the Dominions as far as I know and Butcher Bird is a rarely used name for a secondary character in the story. Even the Dominions didn't really feature for more than a few pages in it.

Leaving the title aside, this was a pretty fun book. Not a masterpiece, but one of those fish out of water fantasy stories where the hidden realm reveals itself to the main character, then pulls them into weird adventures. This one features angels and demons as ordinary denizens of the "spheres" among other crazy intelligent species, magic, flying ships, trips to Hell, getting friendly with Lucifer, old gods, cities of old memories and lost things and so on and so on.

It was an easy read, so it didn't take me much to finish the book. It wasn't so much wanting to know how it ended (which was obvious - the heroes win) but what other weird visions Kardey can conjure before it does. The lead character is a bit uncommon, as well, as a motorcycle riding tattoo artist called Spyder who is still a nice romantic at heart. At least it's not an adolescent child in an English boarding school!

Bottom line: I am kind of curious about the many Sandman Slim novels by the same author, so this book was a success. If you want something easy and fun, this is it for you.