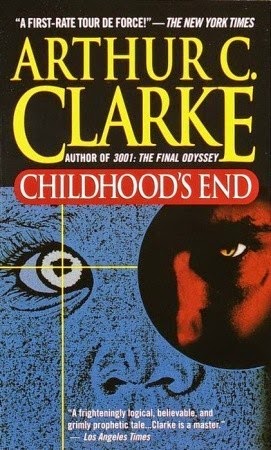 Childhood's End is a really interesting book. It is actually a series of medium length stories set in the same world. It starts with a sort of Independence Day kind of invasion - a peaceful one, though - it continues with the effects on the human world after decades have passed and then it ends with a human evolutionary leap that explains the entire book so far. The reason why I loved it so much is that a vast majority of the ideas in the book have withstood the test of time. Written in 1953, Childhood's End is remarkably modern and rational. Well, maybe today's world is not particularly rational, so maybe it is more modern that the present, which is remarkable :)

Arthur C. Clarke seems to have had an obsession with alien encounters - and by this I mean advanced species that have good reason to come to Earth, other than wanting to steal our water or mine our gold or other stupid thing like that. He wrote 2001: a Space Odyssey and Rendezvous with Rama, both about humans suffering of culture shock after a meeting with an alien species. Personally I think Rendezvous with Rama should not have had sequels, perhaps even Space Odyssey; for me it seems like Clarke continued some stories that had great success, rather than needing to continue those stories.

Anyway, Childhood's End is like that: alien creatures just oversee the evolution of our species on Earth, intervening only on minimal occasions. I loved the idea because it is a quick and dirty sci-fi solution for historical and all too present issues like borders, religion, corruption, politics and all those ugly things that appear like magic when enough people get together. I also loved the kind of Christian metaphor of daemons being directed to oversee and guide the human race, without them being privy to "God's grace", so to speak.

It is not an easy to finish book, as it isn't really an emotional story. There are no heroes that one can identify with; it is just a descriptive, rational, logical narration. It is a good book, though, one that I am glad to have read listened to as an audio book.