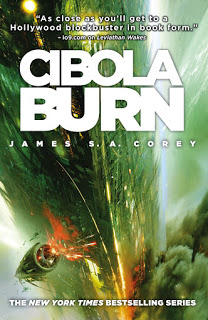 Cibola Burn is the book that worried me the most. James S.A. Corey had created a world in which the Solar System has been colonized and Abaddon's Gate, the third book in the Expanse series, had ended with humanity gaining access to one thousand new star systems. I liked the Solar System background and I really thought the fourth book was gonna suck. Well, while being some of the same old thing as the other books and maybe even better written - so a better book - it also sucked because I could easily imagine Picard and The Enterprise going on a mining colony to settle a territorial dispute and, beside being PG-13, having almost nothing changed.

The plot of the book is about Holden and the Rocinante being sent to mediate a situation between the representatives of an Earth corporation and the people who had landed on the planet before the corporation had even filed a claim. You have your familiar characters like the crew of the Rocinante and Miller and even Havelock (Miller's former partner, now a security employee of the Earth corporation), you have your psychotic leader types that mess everything up while the good guys hesitate to just shoot them, you have the very human characters with children that need to be saved, you have the overwhelming but dumb alien presence and the snowballing crisis that drives it all. I thought the story was a bit of a rehashing of the same ideas and therefore I enjoyed it less than I would have if I had read it standalone. I know that successful series are based on successful books and must present kind of the same so to not alienate its readers, but as the intergalactic situation changes dramatically, damn if I don' feel the plot should vary a little, too.

Given that science and technology have always played a big part in the Expanse, you get to see more attention to the details than from other authors, but so far Cibola Burn felt to me like the least scientifically accurate so far. And yet I liked it, because it is well written and it drives the reader through the story and makes most characters likable and one wonders what the hell would they do if they were in the character's shoes.

Cibola is the Spanish transliteration of a native name for a pueblo (Hawikuh Ruins) conquered by Francisco Vásquez de Coronado, also one of the seven mythical gold cities that the conquistadors searched for in vain.