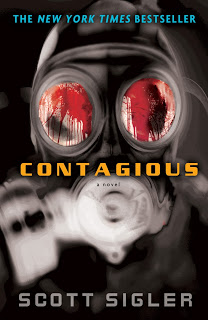 A while ago I was writing about the novel Infected, a sci-fi thriller written by Scott Sigler. In it, an automated alien probe was using biological reconstruction to create a portal for unspeakable (and not described) evil that awaited on the other side. Alien probes being as they are, the operation failed, but not permanently, since the probe remained undiscovered and ready to plan more mayhem.

Enter Contagious, Sigler's latest book, also freely available in weekly installments on his personal blog in both MP3 and PDF versions. Is the guy too nice or what? Today the final episode was released and I can finally comment on the book.

It is clearly a better book than Infected. Not by too much, but definitely more intense. It's like Aliens to the Alien film, only for Infected :) The probe is logically doing all kind of stupid stuff, including duplicating part of his functionality in the brain of a little girl. I mean, we humans have enough trouble as it is with girls, be them small or grown up, albeit the alien probe had no idea I suppose. The US centric approach was kept, there are more explosions, lots of killing, contagious yet centralised alien organisms... in other words, a decent sequel. The only thing I couldn't really get is the father-son relationship between Perry and Dew. Couldn't believe that for a moment, although it may be my fault.

All in all I read all chapters with pleasure, anxiously waiting for the next episode. It would make a nice manga :) I can only thank mr. Sigler for allowing me to read his book without feeling like a thief getting it through a file sharing service.

So, is humanity doomed in this one? Well, yeah... I mean, we still have girls... and besides, I can't possible spoil the ending now, can I? Rest assured that there will be a third book and our favourite aliens may still get rid of the human infestation and bring the love of God on our planet. Hmm, why did I say that? My tongue feels funny, too.