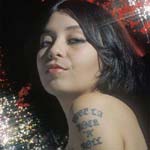 I've first noticed her while she was playing with Sneaker Pimps, making the soundtrack for The Saint (Val Kilmer version). She looked so interesting with her vibrato voice, weird teeth and Asian features. I've even downloaded the whole Sneaker Pimps discografy before I found out that she was with Sneaker Pimps only briefly.

Now I was listening to the remix version of Linkin Park's My December featuring Kelli Ali and I recognized the voice immediately, even if she was singing faintly in the background. So I thought I would share her with you. Below is the video I think makes her look best, even if you can find a lot of videos with her playing live either as herself , either with TigerMouth or with Japanese bands Buck-Tick or Dropz. Also some links to her site and the Wikipedia entry.

Don&#39;t forget her awesome appearance in Bootsy Collins&#39; video of &quot;Play with Bootsy&quot;:&lt;br&gt;https://youtube.com/watch?v=li9Ab0YQtyo