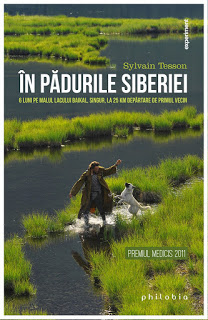 I started to read the book in French, so as to remember the language from my high school years, but then got lazy and after a chapter read it in my native Romanian. The literal translation would be In the Forests of Siberia, but for some reason it was translated as The Consolations of the Forest in English. Either title is misleading, as the forests are not really relevant to the story and the whole thing is a personal journal of a French misanthrope who decided to spend six months alone on the shores of lake Baikal.

I am unfamiliar with the work of Sylvain Tesson, he is a journalist and a traveler and I couldn't compare this with other things he wrote, but judging by Goodreads' description of him, this must be his most famous book. Did I like it? I didn't dislike it. In itself is a daily journal and has very little literary value other than the metaphors Tesson uses to express his feelings. Some land true, some simply don't work. There are no detailed descriptions of the landscape either. The author does not paint with his words, he mostly whines. If there are people around, he will insult their nation and their presence in his thoughts, while being civil and hospitable to them; if there are no people around, he will complain about the nature of society, humanity, religion or state. Left alone for a while, though, he will start to be more positive, inspired by nature, but also by the books he devours and then annoyingly feels compelled to quote from.

Some of his emotions ring true, it makes the read compelling and generates thoughts of how the reader would feel or act in the author's stead. Some descriptions sound exactly like what most people, alone in the (proximity of the) woods would produce if their only company were liters of vodka. What I am trying to say is that the book is a journal written by an egotist, therefore describing only him. The beautiful lake, the woods, people, dogs, the wild bears or anything else are just props so we can all bask in his personality... which is pretty shitty. Just as a small example: in four months of journal he mentions his need of random women coming into his hut twice. He mentions he has a girlfriend once. After getting dumped via SMS he whines continuously about how he lost the love of his life which now has no meaning and only his two dogs (received as pups when he got there) helped him through it. After the six months pass, he just leaves the dogs there, proclaiming his love for them.

So, an informative book about how a random French writer asshole felt while living alone in the cold Russian wilderness, but little else. Apparently there is a 2016 movie made after the book. You might want to try that.