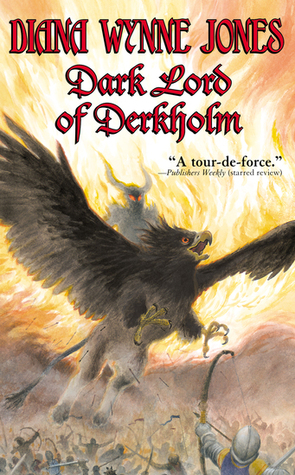 I've read several fantasy satires before and some of them were absolutely brilliant. Now, I am not saying that Dark Lord of Derkholm is not good, for it is competently written and complex in both plot and characters. What I am saying is that it is not that funny. Reading the book is like hearing a corporate colleague make fun of what happens at the office, which should be entertaining and humorous, but comes off as sad and frustrating. The trigger for change in the magical land is a conspiracy of women who couldn't bother to consider the emotional consequences of their actions to the people they supposedly love. And the ending was terrible as well, with a slap over the head moral that lacks any subtlety.

I didn't know Diana Wynne Jones was famous. She wrote Howl's Moving Castle, which I had no idea was a book, on which Ghibli's anime was based, among many other works. Anyway, I had no expectations, but still I stand disappointed. First published in 1998, Dark Lord of Derkholm is quite prescient with its very interesting premise: corporate psychos from Earth (or something similar) manage to find a doorway to a magical land which they immediately proceed to exploit for their own gain. The inhabitants of said magical land need to find a way to protect it.

The book is a not so subtle satire of our own magically beautiful land that we, through inaction, let it be despoiled by greedy idiots who can't think further than the length of their noses. But that's all that it is. There are a lot of inconsequential characters, a lot of setup and world building that leads nowhere and a final act in which so many new characters and races and lands are added for no good reason. The ending neatly closes all story lines, but in a blunt and narrated way that I felt very dissatisfying.

Bottom line: interesting premise, competent writing, but a rather bland and inconsistent story.