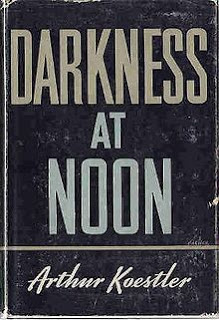 I started reading the book knowing nothing of its author or contents or, indeed, the publishing date. For me it felt like a philosophical treatise on revolutions in general, especially since the names of the countries were often omitted and it seemed that the author was purposeful in trying to make it apply to any era and any nation. Only after finishing the book I realized that Darkness at Noon was a story published in 1940, by Arthur Koestler, a Hungarian-British author who was briefly part of the German Communist movement before he left it, disillusioned. The main character is probably a more dramatic version of himself. As an aside and a fun coincidence, in July 2015 the original German manuscript of the book was found. All the since published versions are based on an English translation after Koestler lost the original. Even the published German version is a retranslation from English by Koestler himself.

The book is difficult to read because it is packed with deep philosophical and political thoughts of the main protagonist. Like a man condemned to purgatory, Rubashov is a former party leader now imprisoned by the very regime he helped create. While waiting for his interrogation and sentencing, he maniacally analyses his life's work and meaning, trying to find where the great revolution failed and why. One of the last survivors of "the old guard", he realizes that the new version of the party is a perversion of his initial ideals, but a logical progression of the principles he followed. He remembers the people he himself condemned to death and tries to understand if he had done the right thing or not. Still faithful to his views that tradition and emotion should be ignored and even eliminated, progressing by logical analysis and cold decisions, he tries to collect his thoughts enough to find the solution, not for himself, but for the failed revolution.

Darkness at Noon is a relatively short book, but a dense one. The author makes Rubashov feel extremely human, even as he remembers his own moments of monstrosity. Repeatedly he reveals to the reader that he thinks of himself as an automaton, as a cog in a machine and that he feels little about his own demise or success, but greatly about the result of the thing bigger than himself in which he believes. Yet even as he does that, he is tormented by human emotion, wracked by guilt, pained by a probably imaginary toothache that flares when he feels his own mistakes and regrets his past actions. He never quite gets to a point to where he is apologetic, though, believing strongly that the ends justify the means.

I liked it. It is not a political manifesto, but a deep rumination on political ideas that the author no longer adheres to. While I am sure many people have tried to use it as a tool against Communism, I find that the book is more than that, treating Communism itself just like another movement in the bowels of humanity. It is almost irrelevant in the end, as the story goes full circle to trap Rubashov in a prison of his own mind, with many of the characters just reflections of parts of himself. In the center of it all stands a man, an archetypal one at that, the book raising his fleeting existence higher than the sluggish fluctuations of any revolution or political ideals.

I read on Wikipedia that Darkness at Noon is meant as the second part of a trilogy, but from the descriptions of the other two books they don't seem to be narratively connected. I certainly didn't feel I missed something discussed in other material. Highly introspective, the story is often thought provoking, forcing one to put down the book to think about what was read. It is, thus, very cerebral: the emotions within are not the type that would make one read feverishly to get to the end and the end itself is just a beginning. I warmly recommend it.