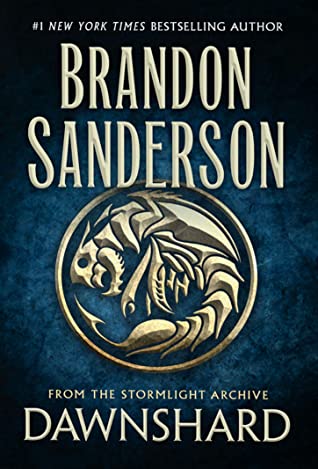 Brandon Sanderson writes books set in many worlds and having to read again and again about the same characters can tire people up (probably writing about them, too). So he has this system of writing shorter books in the same universe, but featuring less significant characters, thus maintaining interest in the world, keeping it fresh in the mind of the reader and showing different perspectives on the same universe. And while in theory one could skip these, they often add some new angle to the story and expand concepts and characters, so in practice you have to read them if you like the series they are part of.

Dawnshard features Rysn, the female trader that has lost the use of her legs in an accident. I have to admit my memory is not that extensive, so I genuinely don't remember that or who Rysn is in the main books, but it's irrelevant, because this is a somewhat standalone story. At the behest of both queens Fen and Navani she captains her ship to a remote island where mythical riches can be found, accompanied by (the) Lopen, his cousin Huio and Cord.

What I thought was interesting is that completely new enemies have been defined in this book. Not some throwaway antagonists used solely here, but vague references to god like creatures that could destroy the entire cosmere. Adding cosmic terror to the Stormlight Archives books can only improve it! Can't wait to see where this is going.

As usual Sanderson's writing is smooth and the reading is fast. I spend at least twice the amount of time reading other books of similar length and I often feel deep regret every time one of his books end. Dawnshard was no exception. Maybe the plot is simpler and more linear than other books, but it opens up captivating avenues.