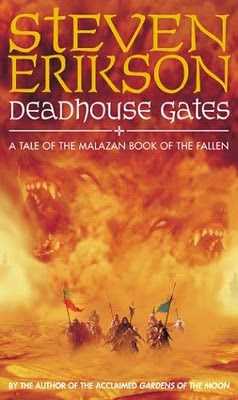 The second book in Steven Erikson's Malazan Book of the Fallen series, Deadhouse Gates starts from where Gardens of the Moon left, using some of the characters, but in a completely different storyline. Thus, it can be read as a separate book.

I found Deadhouse Gates to be both better in the good parts as well as worse in the bad parts than Gardens of the Moon. The characters are more complex, the storyline more interesting, the battles more epic, but the magic is even stronger, its power never truly explained or detailed so that it fits in the background. What use is an army, if a single mage can obliterate whole realms? How does a human empire span so much land unchallenged, while creatures that can crush it singlehandedly exist in the world?

As expected, the characters more their separate ways, occasionally meeting for brief periods of time, but essentially having their own story arches. There is the Coltaine arch, with the moving story of a brilliant commander protecting thousands of ungrateful whiny rich refugees; the Felisin arch, which describes the life of the younger Paran sister, driven by the hate towards her older sibling and adjunct to empress Laseen; the story of Kalam, the assassin, in his quest to kill Laseen; the tale of Crokus and Apsalar and Fiddler, travelling the magical desert Raraku; finally, the story of Icarium the Jaghut and Mappo Runt, the Trell, both insanely old and searching for Icarium's lost memories.

Great book, I started reading the third in the series and I don't see me stop until I finish the entire Malazan saga. I found an interesting link that can serve as an encyclopedia of the Malazan universe. Here it is: Malazan universe.