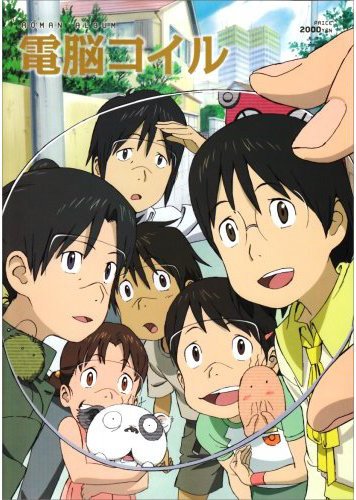 Dennou Coil is a cross between Ghost in the Shell and Tonari no Totoro. How can it be possible? Simple! First remove all that usual Japanese obsession with boys in high schools (you know, everything happends to some high school children, usually boys, all in the same class, maybe some opinionated women, they fight, they grow in "level", etc). Instead use girls in elementary school. Then move it in some future world where people merged the real world with the virtual, and add cute creatures like from Tonari no Totoro (and the girls) in the virtual world! Yatta! :)

Anyway, getting more serious now, the anime is really nice. The Augmented Reality concept is pretty cool and (even if towards the end it gets a little spiritual and unnecessarily action like) stays pretty consistent. Imagine wearing clear glasses that add to your usual display of reality information like virtual pets, virtual laptops, keyboards and displays, maps of your current location and so on.

The children are all drawn towards a strange phenomenon that adults seem to regard as fantasy, called Dennou Coil, where the consciousness of people gets transferred to a virtual nether world via the quantum circuits in the glasses.

Towards the end, adults try to confiscate the glasses from the children and, after a hearty discourse about how real things can be touched, I thought the whole cool idea of the series would be perverted towards some social goal of keeping children "real", but it was not so. You will have to watch the series to know what I mean :)

Bottom line: pretty interesting and captivating. A little too childish, but without resorting to silly behaviour or self referential comedy that I see so much lately in animes. The anime has only 26 episodes, with little chance of more. The manga itself is complete as well. Couldn't find the manga free online. If you know where to find it, leave me a comment.

There is no original manga for this show... the anime is the original, there is a novel that was released slightly earlier but only loosely based on the original idea by the creator of the anime; there is a manga that&#39;s just a spinoff and only lasted 1 volume or something. The anime&#39;s good enough :)