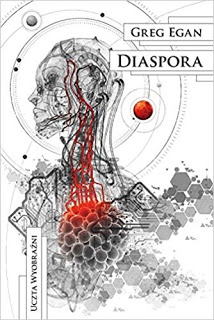 I remember reading Greg Egan books when I was very young and loving them, so when I've seen he was still writing, I've decided to read one of his earlier books: Diaspora, published in 1997.

It's hard to describe it in a way that makes it justice. Imagine a poker game where you bet not with money, but with imagination. You look at the cards, you think you've got a good hand, and you place all your imagination on the table. Greg Egan looks at you, looks at his hand, looks at what you put down, then bets 100 times more. And while you are looking at the table, unbelieving, you realize that his bet spreads out in multiple dimensions, more than you can handle by orders of magnitude of infinity. It was like that.

The book is about a posthumanist era on Earth where most people have chosen to live in virtual constructs called polises. They have translated all relevant biological and mental functionality into the Shaper language which polises run. As the book describes the birth of a new citizen, its ascendancy to consciousness, there is no actual story. In that way, the whole book is rather dry, because it is about reason and science and mindblowing theories of consciousness, physics and mathematics. And that's only the beginning. Split into several parts that have common characters for no other reason that they've been described before and that are mostly independent, the book's driver is first a gamma ray burst that destroys the fragile remnants of the Earth's biosphere and then another, more colossal catastrophe that threatens the entire galaxy. That's basically the whole drama, the rest is just mental exercise as humanity explores, then escapes the universe into a infinite multidimensional ladder of universes that makes faster than light or time travel as ridiculous as it is pointless. I mean, really, the entire plot of the book revolves around a completely new theory of how physics work which is described (in layman's terms, with explained diagrams) by Egan.

Bottom line: filled with real scientific theories and ideas that transcend just about anything you thought means anything, the book is at the same time amazing and difficult to enjoy. It starts as something that you have a hard time wrapping your head around, but you can just about do it, then goes on exponentially from there. It's Asimov on steroids (if steroids would be produced by femtoscale machines using the complete simulation of all possibly interactions in a living human body stored into a single neutron-as-a-wormhole). I am at once both elated and terrified to read one of his recent books.

Favourite quote: "Conquering the galaxy is what bacteria with spaceships would do - knowing no better, having no choice".