Update: I recognized the voice of Brad Dourif as Piero (how can one not?) so I went to see who the other voice actors were. If you, like me, felt a strange attraction to Callista Curnow, that's because her voice is that of gorgeous Lena Headey. Also you might recognize Susan Sarandon as Granny Rags (hee hee!) or John Slattery as Admiral Havelock. But pretty much no one comes close to Brad Dourif, except perhaps Roger Jackson, who is the voice of Mojo-Jojo! 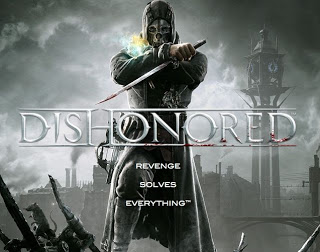 As you may know, I am a great fan of Arkane Studios games. They did Ultima Underworld, Arx Fatalis, Might and Magic X (which for all intents and purposes was Arx Fatalis 2) and now they did Dishonored. You will probably say that Ultima Underworld was actually a Looking Glass Studios game, but when they dissolved, some people from their team went on to work for Arkane and the resemblance of the games is pretty obvious. Anyway, I am now in a small village in Italy and only have Internet at my work. Imagine my great surprise when I discovered a kit of the Dishonored game on my laptop. I immediately installed it and played the game for a non stop 20 hours until I finished it. However, it was my desire to see the entire story (and to get some sleep in the weekend) that made me finish so quickly. You see, the game is a first person shooter-adventure that follows a storyline. However, on each stage you can explore and find a lot of secrets and side quests and even influence the story a little bit through your actions. The universe in which the game is played is a wonderfully crafted steampunk world, driven by whale oil and technology invented by mad scientists and filled with political intrigue. I can safely say that the game is a combination of Arx Fatalis, Thief/Assassin's Creed and Vampire: The Masquerade – Bloodlines.

For an analysis of the game, there are a lot of things to be said. One of them is that the 3D world was, as far as I could see, almost perfect. I didn't get stuck in some fold of the wireframe, I didn't reach places I shouldn't have reached even when having the power to Blink, I didn't see through textures or seen any major bugs, actually. The game is a huge collaboration of companies, with people from all over the world, they could have screwed up anywhere: design, storyline, sound bits, software, 3D world, etc. It did not happen. You can also see the love that was poured into the game when the story does not end with an obvious finish, but continues on for a few stages. They could have worked less for the same money, but they somehow chose not to.

The gameplay is a joy. You have different ways of solving problems: you can kill anything that moves, you can choose to not kill them, but perform a chokehold on them and hide their unconscious bodies so you can avoid detection or you can go on high ledges and sneaky paths to avoid conflict all together. An interesting component of the story is The Outsider a supernatural being, probably a god, that looks like a normal guy, dressed normally for the age, but having black eyes. He is treated as the Devil in the official religion of the country, but he acts like your ally in the game. His only obvious interest is to have fun watching the chaos. For these purposes he gives you his mark and the gift of magic, which allows you to teleport, possess small animals and humans, summon a pack of ravenous pack of rats to devour your enemies and other fun things like that. The world if very interactive. You can, for example, take a random item like a bottle and throw it away. This would either unbalance your enemy, if you hit them directly, so you can deliver a deadly sword strike, or cause them to go to investigate the noise of the bottle breaking. One interesting option is to take the head of the enemy you have just beheaded and throw it into another opponent. Each level had hidden magical artifacts which you can find using a special Outsider device, a living heart with mechanical bits which you hold in your hand and that talks to you - told you, fun stuff. This usually prompts you to go out of your way to find said artifacts. The complexity of each stage is staggering. The first two stages I tried to play as completely as possible, which took me a lot of hours. After the first level ended I felt pretty good about myself. I had explored a lot of the map and I felt pretty smug about it. In the final summary of the mission I saw, to my chagrin, that I had found about half of all the valuable objects that I could have found. The rest of the missions I just breezed through, in order to see the ending. If I would have played this game as thoroughly as I possibly could, it would probably have accounted for many tens of hours of gameplay. Well, maybe it's me, but emergent gameplay is the coolest thing since fire was invented.

The devices you possess are old school enough to be a lot less effective than magic. You have your trusted one bullet pistol, which you must reload after each firing, you have your crossbow, which can fire darts, sleep darts or incendiary bolts, you have delicious bombs which, when triggered, fire a fast winding metal wire that cuts your enemies to pieces, grenades are always fun, and so on.

There are some issues which I had with the game though. It seemed to me that the magical spells were rather unbalanced. I cannot tell you how much they are unbalanced until I play the game again in another way, but it seemed to me that you absolutely needed to have Blink and Dark Vision and that the best offensive spell was the summoning of the rat pack. The rest were almost useless, at least by description: something that allows you to attack stronger and more enemies at once if you have enough adrenaline, something that allows you to possess animals, but there aren't that many animals in the game, and only partial possession of people, something that causes a gust of strong wind. Well, I will try them soon so I can tell you more in an update. Another thing that felt useless to me were the bone charms who gave me stuff that didn't really seem important. I did play the game on Easy, since I didn't have a mouse for the laptop, so that may explain my disdain of the things.

It is important to realize that the game has downloadable missions and content through Steam. This means the story can go on. I intend to explore this avenue. Also, after playing a second time I have to say that I was amazed of the option to not kill anyone the entire game. Even the assassination missions have ways of getting rid of the characters without killing them (even if their fates are usually worst than death). If you want to go that way, please always check that the unconscious victim is actually unconscious. Otherwise you end the mission with one or two dead people and there is no going back. One example is if you choke one guy, then let it fall with the head in the water. He dies even if you immediately remove him.

All in all I cannot recommend the game enough. Add to this that after you buy it, you also get extra chapters as downloadable content and, who knows, maybe they will allow the community to make their own chapters. It was just fantastic. Go play it!

I embed here an example gameplay from someone who is obviously more skilled than I am.