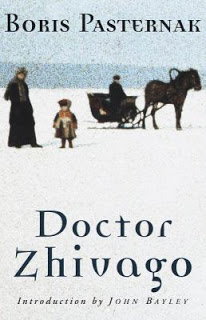 It involves Russia! The story of how Boris Pasternak's Doctor Zhivago got popularized and received the Nobel prize for literature is fascinating and one of the reasons why my wife and I decided to read it as part of our own private book club. She loved the book, although she admitted she didn't understand a lot. I couldn't finish it because I didn't understand it at all!

Let me get this straight, this is not a bad book, the fault lies solely with me. That being said, I've read half of it before I decided to watch the TV adaptation from 2002 and realized I had no idea who anyone was. I had read half of a book, enjoying the way Pasternak describes individual lives, but I didn't remember one character or scene. And the explanation is simple: this is like Crash, on steroids, had sex with Gone With The Wind and had this bastard child around the first World War in Russia. People have three different names, plus nicknames, that the author just splays around without explanation. Events are described through short chapters that sometimes connect via a character seeing the same things from a different perspective or saying something about a character, using a different name than the one we read about it previously. And all these people keep bumping into each other again and again. Sometimes there is no rhythm in how things are written, sometimes it sounds like poetry. There is huge attention to some details and complete ignoring of others. And so on. It is not an easy book; it requires your full attention.

It is obvious that Pasternak loved people and he described their experiences and toils during times of great upheaval, but for him those paled compared with the love stories and the feelings of the characters involved. I can understand how he was confused on why people thought his book was against the Soviet system, where it was clearly about people. I am sure this book is great, it is just not for me. If you want to try it, I suggest you read the summary in Wikipedia so you understand what is going on and you do not read it in bits of 15 minutes in the subway.