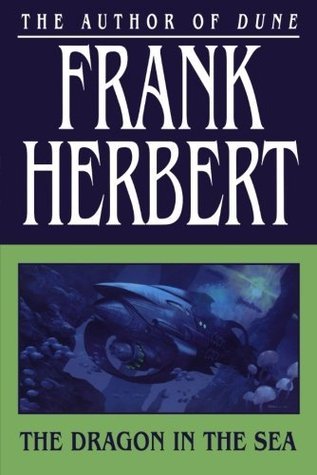 The Dragon in the Sea could have been a story about real life submariners as, other than a few details really, the novel is barely science fantasy. The story is about a near future in which the West and the East are in an eternal Cold War where no one trusts anyone because of deeply embedded sleeper agents and where conflict is fought in the ocean between sophisticated nuclear submarines over underwater oil reserves. Places like the British Isles have been nuked into oblivion and the big prize is bringing home petrol syphoned from the other side.

The entire action of the book happens in such a submarine, tasked to go through enemy lines and extract oil from a hidden reserve. There are no chapters, just one long and action filled story. Yet the focus is not so much on the world or the technology, although both are described pretty well, but on the characters, on why and how they function, on what such a prolonged and tense conflict can do to people's psyche. The main character is indeed a psychologist, while also an electronics specialist, in a crew of four - including the captain.

The careful analysis of character motivation and inner thoughts is reminiscent of Dune, but also the idea of global conflict over a finite resource affecting the entire ecology and sociology of the planet and extreme peril changing people to their core. Ten years before Frank Herbert was publishing Dune, its seeds were clearly already planted.

To me it was a fascinating read. It was one nonstop trip filled with danger, but the author was clearly interested in how the characters were functioning under extreme stress and how it translated at a very visceral and atavistic level. It was a combination of action and psychoanalysis, still a bit unpolished, but deep and insightful. I liked how Herbert hinted at what the world had come to by just placing a few crumbs of information in an otherwise uninterrupted sub adventure. Imagine Das Boot, but with a socioeconomic and psychological message in it. I liked it!