In my own quest to find interesting books that would help me understand my place as a software developer I've stumbled upon Dreaming in Code, something I knew nothing about other than it featured the word "code" in the title. It had to be good! 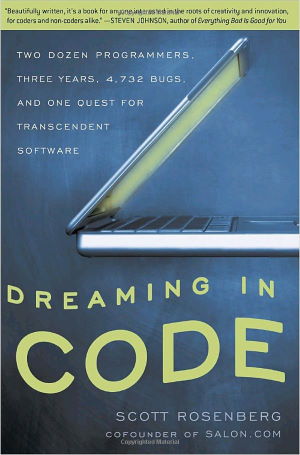 In the end the book surpassed my expectations by describing software from a totally different point of view than the programming books I am used to. Dreaming in Code is not a technical book. It can be read by software developers and bored housewives alike. It features a kind and professional tone and the three years of documenting the book can only help put the whole story in perspective.

The storyline is simple: a software visionary decides to start a new project, one that would be open source, innovative and revolutionary and also a replacement for slumbering Outlook and Exchange type of software. Scott Rosenberg documents the development process, trying to figure out the answer to the decades long question: why is software hard? What starts very ambitious, with no financial or time contraints, ends up taking more than three years to get to a reasonable 0.6 release, time when the book ends. The project is still ongoing. They make a lot of mistakes and change their design a lot, but they keep at it, trying to learn from errors and adapt to a constantly changing world.

For me that is both a source of inspiration and concern. If Americans with a long history of software spend millions of dollars and years to create a software that might just as well not work, what chance do I stand trying to figure out the same questions? On the other hand the spirit of the team is inspirational, they look like a bunch of heroes battling the boring and pointless world of software development I am used to. And of course, there is the little smugness "Hey, I would have done this better. Give a million dollars to a Romanian and he will build you anything within a month". The problem, of course, is when you try to hire two Romanians! :)

Anyway, I loved this book. It ended before it had any chance of getting boring, it detailed the quest of the developers while in the same time putting everything in the context of great software thinkers and innovators and explaining the origin and motivation behind the most common and taken for granted technologies and IT ideas. It is a must read for devs, IT managers and even people that try to understand programmers, like their wives.

Here are some links:
Official book site
Scott Rosenberg's own blog
The official site of the Chandler software project