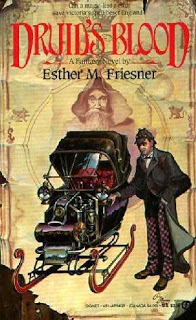 I was first directed to Esther Friesner by the excellent audio reading of The Shunned Trailer, a short story which humorously and skilfully combines Ivy League competitiveness with Lovecraftian mythos. You can (and should) listen to it on the also excellent podcast site EscapePod, which together with its sister sites Pseudopod and Podcastle provide free weekly audio stories from the genres of sci-fi, horror and fantasy, respectively. The story itself was so amusing to me that I actually laughed out loud, which - for those so blissfully unaware of it - is not the same thing as LOLing. I made a short foiree into some Lovecraft stories, then proceeded on reading something of Friesner's.

Druid's Blood is an alternate universe Sherlock Holmes story. The "alternate" in the universe is an England where the druids repelled the Romans by using magic and then went on protecting the British isles with a magical shield that prohibits the entry of - for lack of a better word - contraband. This includes, for example, steel. It is an interesting modern bronze age world in which the druids are the highest religious order, everything is run by magic, technology is pretty much forbidden, but the Brits still have their high ideals, the monarchy and Sherlock Holmes. The irony is thick when the work comes from an American author.

Anyway, I don't want to spoil the story; you have to read it for yourself, but I recommend it highly. The first chapter is not so good, so I suggest you go through it even if you are not terribly enthusiastic about it. The rest, though, made me not let the book out of my hands - to my wife's chagrin. Not as funny as The Shunned Trailer (after all, it was not intended as a parody) it combines several famous ideas and characters with this twisted history of a magical Britain. The book is not meant as an exploration of history, though, as the characters and references are not really meant to have been contemporary or explainable by small tweaks in the time stream. I liked the book, although I don't know if I want to read more of the author right now. She is certainly smart and funny, but even if I enjoyed the book tremendously, it couldn't reach the level of good fun and concentrated smarts that The Shunned Trailer seemed to be. As such, I recommend reading the book first, then listen to the podcast of The Shunned Trailer. Perhaps in this order, the pleasure level will be higher.

There has been a lot of discussion on the changing of the names of Sherlock Holmes and doctor Watson. Whether it was a form of respect to the original characters to change their names if you change their entire world or whether it was a copyrighting issue or some other motive, I see no reason to dwell on the matter. After all, the epilogue is a tip of the hat to doctor Sir Arthur Conan Doyle, who invented a character of such incredible skill and intelligence, only to relegate his own role to the faithful sidekick. Enjoy the book.