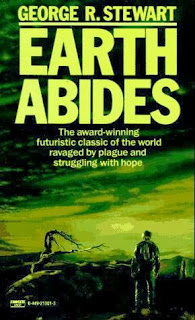 Written in 1951 by George R. Stewart, Earth Abides describes the end of civilisation by way of a deadly pandemic. The main character is an intellectual, used to observe rather than do, therefore he gains comfort in the idea of observing the end of the world. He is immune to the disease, as are few others, and so he becomes not only the observer, but the patriarch of a whole new tribe of people.

The pace of the storytelling is rather slow and the story itself spans several decades, until Ish dies of old age. The book is clearly well written, and I would say well thought, as well, but I take issue with Ish's character. He is proud of being an intellectual, of reading books, he worries all the time about the fate of civilisation, but he really does nothing to share his knowledge or do something of what he is thinking of. I know that's a trait I share, unfortunately, but his level of passivity is insane.

If at the beginning of the book I was relishing the description of the single guy finding ways to survive, both physically and mentally, then liking the way the little group of people was growing into a tribe, then I kept waiting for something else to happen. Instead, they all become complacent, living in houses they didn't know how to maintain, using products from abandoned shops they did not care to learn how to make, forgetting how to read, and so on. The biggest calling of an intellectual is to continually learn and teach. Instead, in what I see as great hypocrisy, Ish is merely content to be slightly more learned than the people around him, thinking to himself like he was reading from the Bible, even if he considered himself as an atheist rationalist, then having hopes that his child will grow to be an intellectual and spread it around, as he was doing none of that. He just complained endlessly about how stuff should be! That was infuriating.

Perhaps that is why it took so long to finish the book, as the ending felt horrifying and even insulting to me: people living like the old American indigens and caring not one bit of the immense body of knowledge that came before them. Perhaps what was worse is that this scenario seems very plausible, too.

What was refreshing (if you can use this word for a book that is 60 years old) is that there were no depictions of warrior groups roaming the land, looking for slaves or whatever, or any other type of antagonistic situations that required heroic violent response. It seems to me that this is almost a requirement in modern apocalyptic sci-fi, if not in most of it.

The style of the writing and the thoughts of its main character are a bit dated, but not terribly so. Electricity is not really useful for much other than lightning and maybe listening to radio, so they don't feel they need to maintain it one bit. Women are not as learned or smart as are the men, but that's OK, because they are women. It is normal for some people to not know how to read. A man can decide for another what is best, just because he thinks he is smarter, and it is only civilised to let them choose for themselves and completely optional. Buildings are mostly wood, so a big fire would burn a town to nothing. And so on and so on.

I can't put my finger on it, but there is something 50ish about the mindset of the lead character that definitely feels alien to me now. Perhaps the idea that, even if he were to make the effort to teach the children to read, the only books that would be of use would be technical or science. That's an incredibly weird point of view to find in a fantasy literature book.

Anyway, as one D.D.Shade lamented in a 1998 review of this book: When you're talking to someone you just met and you discover they 'love' science fiction, and you ask with great anticipation if they have read Earth Abides, the answer is "No, should I?". I agree with the man. The book should be read and should be known, as a classic of the genre and a reminder of how "the first Americans" thought about these things. Don't expect to go all "Wow!" while reading it, but as it stands, there are few books that are as thorough about the end of civilisation as this one.