This 6 episode long anime can by all rights be considered a single movie segmented into 6 small stories. The story is not extraordinary and the animation not great, but the quiet way it is told makes it nostalgic and generates a lot of kind feelings. What's it about? There are these two (highschool, of course) guys in a not far away future where robots and androids are common place. Some of them are advanced enough to obey complex commands and to look human and they all follow the Three Rules of Robotics, as coined by Asimov. One of the guys notices in the logs of his house android that it goes out from the house, occasionally, to places where it hasn't been instructed to go. The two friends follow the logs and find a weird bar where androids and humans must obey a single rule: all customers are to treat each other the same and not discriminate against robots. This makes the two understand the complex feelings that robots can have and discover their own difficulty in relating to said robots under the weight of society expectations. There is even an "Ethics Committee" that hates robots and wants to limit the interactions between man and machine, but just before they make any move the show ends. 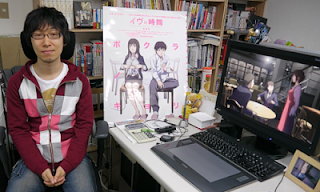 Eve no Jikan was an interesting concept, something that reminded me of some of the quieter episodes from Ghost in the Machine or Denou Coil, which says a lot considering that GiTS is my favourite anime ever. However, the sixth episode felt like one of the others and then it suddenly says the story is finished, so its production must have ended prematurely. Maybe with a little more backing, it could have become a cult anime, as well.