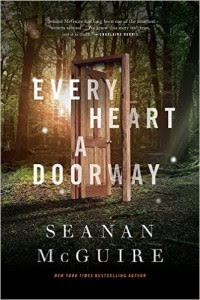 Every Heart a Doorway started well. Here is this girl that arrives at a specialized institution for "wayward children" - runaways, boys and girls that somehow don't fit into the slot their parents have prepared for them. Like many young adult stories, the main protagonists are young people into a place that accepts them as they are, but is still formal, with strict boundaries. In this case the idea was that the youngsters each have found the door to another world, a world that not only is completely different from ours, but is perfect for them. They have spent some time in it, only to accidentally leave or to be thrown out, with no way to return. After some times years in that place, changed to their deepest core, it is difficult to readapt to the real world, which makes their parents send them to this kind of institution.

From here, though, Seanan McGuire just piles up the tropes, while the careful writing style and setup from the beginning of this short 173 page story decays into a rushed and inconsistent ending. Just like Hogwarts, the house is managed with ancient British style rules, fixed meals, absolute authority, etc. There are children and there are adult teachers. The headmistress is someone who went through the same thing and decided to help others, but outside of that she's just as certain of her point of view and as self righteous as any of the parents that abandoned their offspring there.

And there is this... style, this way of describing the interaction of characters, which annoyed the hell out of me, without being bad as a writing style. You see, the young girl that arrives at the institution is time after time met by people who finish her sentences for her, show her that they think they know better than her, and she accepts it, just because she's the new girl. With that level of meek submission, I wonder why her parents ever wanted her gone. Her perfect world - a place of the dead where she was a servant of royalty and the skill she had learned best was to stay completely still for hours lest she upsets the lord of the dead - was also about total submission, and she loved it there. Most of the people that explored other worlds were similarly bonded to dominant characters that have absolute control over them.

In the end, children start to get killed and the response of "the authorities" is to hide the bodies and instruct youngsters to stay in groups, while the main characters suddenly can use their skills in the real world, as it was completely normal, but fail to use them properly to find the obvious killer. The scene where a skeleton tries to tell them who the murderer is - even if that should not have been possible in the real world - but can only point a finger, so they give up after one attempt of communication is especially sour in my mind.

So yeah, I didn't like the book. I felt it was a cheap mashup of Harry Potter and 50 Shades of Grey, polluted by the author's fantasies of submission and not much in the way of plot or characters. And it's too bad, since I liked the premise immediately.