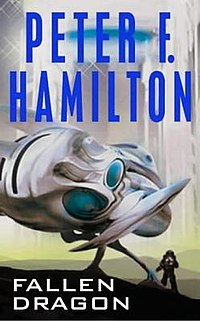 Enough said, I started reading anything this guy wrote. I've found Fallen Dragon, a single book this time, but filled with ideas that obviously grew into the Commonwealth Saga. With this earlier novel I did find Hamilton's Achilles heal, the one thing that bothered me in his books more than the slight over detailing of everything: the characters have no freedom.

Let me expand on that. When you write something, you have the characters in your head, fighting and shouting to let them free to do what they want. If you do that before they are fully matured, they break havoc with your writing, even considering you have the skill. However, when you force them to do your bidding like slaves, you also damage your story, because they lose credibility and consistency.

In this book more than others, the characters were forced to do something that they should never have done. A soldier looses his squad to a bunch of idealistic galactic eco terrorists, but eventually joins their ranks. That is just not possible. I was wriggling in bed, waiting for the moment the hero would remove his mask and kill that brain damaged bitch. He did no such thing, just letting his mates die for no reason. Thinking back, the same happened with Judas Unchained, when all characters willingly marched against an alien that was clearly lacking any resources and just trying to escape in a wild wild west kind of quest "let's all personally go and kill the bad guy".

Back to Fallen Dragon, it is an interesting story, with some moral teachings as well as a delicate temporal paradox, but it's not comparable with Hamilton's latest books.