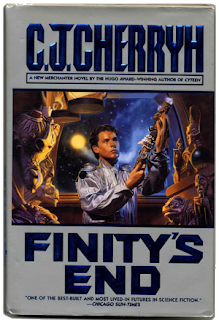 I don't remember where I got the idea to read Finity's End, but I had no idea it was one book in a long series of Merchanter Aliance/Union books. So at the same time I liked that it started with a rich world and a very clear idea where it was coming from and going to, but also felt the missing information that I would have had if I had read the series from the beginning.

That being said, I have to say I liked the book. I found C.J.Cherryh's world building extraordinary and considering she has written more than 60 books, her attention to detail and the way things click was really nice. Yet at the same time, this made the story slower, more grounded in a larger reality that didn't really interest me.

The story of Finity's End is of a young boy who wants to live on a planetary station and study the intelligent indigenous life with which he made the only personal connection he values. Instead, he is being pulled up to a spaceship he doesn't care about for the only reason that his mother was originally born there. Faced with prejudice and culture shock, his story of adapting to the new environment is a lot more interesting that the political and economical dealings the ship is engaged with and often I felt that, while I appreciated the realism of the plot, I couldn't wait to get to the personal part, with the characters I really cared about. Perhaps if I had read the entire series I would have felt more connected to older characters and less to this adolescent coming of age subplot.

I found it interesting the author's description of two entwined cultures that live in different space and even different time: there are the planet and station folk and then there are the space ship people. They interact, but for most of their existence they are almost different species. Perhaps if the viewpoint on this was more modern I would have enjoyed it more, but as such, it felt like a book written in the 70s.

Bottom line: I liked the book, but not so much that I will start reading the others in the series. I liked the world building and I loved the way the characters subtly evolved in their interaction with each other. I didn't really connect with the larger plot of trying to bring peace to the galaxy and I felt nothing towards the Mazian boogieman who never made an appearance in this book. While I believed the possibility of a future like that, the technological part of the book felt quite obsolete to me, even if the publishing date for Finity's End is 1997.