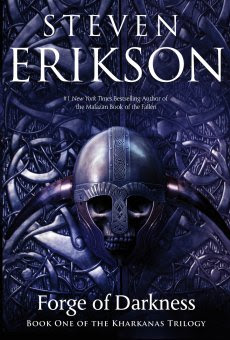 I really wanted for Forge of Darkness to be great, something that would wash away the disappointment of the tenth and final book in the Malazan Book of the Fallen. And, in a way, it is. However, with increases in the inner philosophical monologues and a downplay of magic, with a plethora of characters that, for anyone not reading (or remembering, like me) the entire Malazan series, don't yet make sense, it felt raw, pretentious, more in line with Steven Erikson's admission that after 20 years of writing, the voices have stopped nagging him (for a while at least, as evidenced by this book). If this was supposed to be a book to be read, understood and loved, then I cannot see it as a success. If it was only a way to unload the chaos of characters demanding voice in the author's head, then it is quite a realization.

I won't describe the plot in detail. Enough to say that it is all happening in the Tiste realm and it is the story of the beginning of the high magic used in the Malazan cycle. The Azathanai, magic creatures of unknown potential, start interacting with the world on a more personal level. Draconus marries a queen, while K'rull starts bleeding magic as a gift for anyone to use. Eleinth break open into the world and gates for the major flavours of magic are opening as a result of Draconus' love gift. Through all of that, the division of the Tiste and the break of civil war are preparing to shatter the realm of Kurald Galain.

I imagine the second book will be a lot more active, with magic breaking out wild in a world unprepared for it, however the first was more about presenting characters (a zillion of them) and setting the stage. My impression was that, even if Tiste people live for hundreds of years, not every soldier and common man can have pages of internal monologues about the philosophical aspects of living. That is the biggest failure of a book that is otherwise brilliant. I will continue reading the Kharkanas cycle (I doubt it will end as a trilogy), of course, but I am starting to ask myself when the next book of Ian Cameron Esslemont will come out.