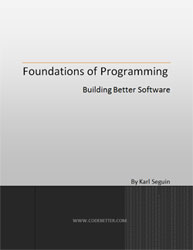 Foundations of Programming is a free ebook written by Karl Seguin, a member of the CodeBettter community. As you might have guessed by now from the fact the book is free, he is Canadian. :)

There is even a Foundation of Programming site, where there are a lot of free resources on programming as well as other free ebooks.

About the book, it is a good read. A bit inconsistent, it seemed, since it starts with chapters on Domain Driven Design, Persistence, Dependency Injection, Unit Testing, then moves to Object Relational Mappers and then has three "Back to Basics" chapters about Memory, Exceptions and Proxies. There is a logic to this, but the jump from expert to junior programming and then back again was a little annoying.

Bottom line, it is a good and easy read for all levels of programming. People might be attracted to the way Karl is expressing his opinion without actually being biased towards any of the usual debate parties. Beginners might learn about the foundations of the stuff they take for granted, like heap/stack, while more advanced developers can start thinking about structured ways of doing work, like DDD and automated unit testing. Neither chapter is a complete new revelation, but taken together, they do present a clear picture of programming from Karl Seguin's perspective and can surprise you on matters you thought you had complete control over.