I wanted it to sound like Fruit of the Loom, for the connoisseurs in gaming :), but failed miserably. This blog post is about the exotic (and shamelessly expensive) fruits one can found in market stores.

The first one is the Lychee fruit. It is small, has a rough skin that has to be removed and a big seed inside. It leaves little else, but the flesh is very tasty, with a taste like that of a grape, but less sour and stingy. No wonder it is called the Chinese grape. I recommend it, at least try it once. 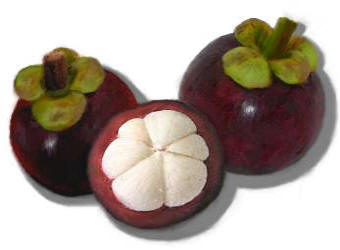 The Mangosteen. Now that's a fruit. Big as a small apple, it has a similar hard skin to remove and a similar taste as the Lychee, with the added advantage that it has more flesh. I would venture to say that this is the most tasty fruit I'd ever tried, even if a little too sweet. There is a funny story here, too. When I was a child I used to keep newspaper bits of the "did you know?" column (back in the days when newspapers has a science and information section). One of them said that the Mango is the king of the fruits, the very best in taste, but hard to transport because it rots easily. I was disappointed when I first tasted mango. It wasn't even tasty. But apparently, the author of the article made a confusion between the Mango and the Mangosteen. 20 years later, the article is vindicated ;)

The Carambola. A yellow star shaped fruit that can be bitten into, has the taste of a Quince fruit and a bit of its texture, but a bit finer. I would prefer it to quince, even if I don't particularly enjoy apple/pear tasting fruits.

The Kiwano, or horned melon. This is an odd fruit. It can be cut in quarters and eaten like a melon, has a greenish yellow color and taste like a combination of cucumber and banana. It is an interesting experience :)

I have tried another fruit, one that looks like a plum shaped (but smaller) orange. And it is :) It is like an orange pill. If it weren't for the price, I would use it to make arranciata. The name is kumquat and it can be hybridised with lime to fruit limequats. There are a lot of citrus fruits in the world, not only the orange, lemon and grapefruit!

For other exotic (for me) fruits, check out Part 2.