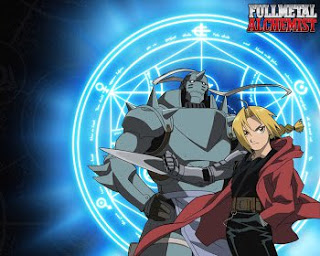 The final chapter of the Fullmetal Alchemist story has been released today. Have the Elric brothers regained their bodies? Have they sacrificed everything in that Japanese way we so love? Did they get to yet another place filled with Nazis, turned vampire and got to be characters in an Uwe Boll movie? You will have to read the manga to find out! :) The good news it that following the link above you can do just that!

As you may know, the anime finished abruptly a while ago with the two brothers teleporting to our world in the middle of World War 2 and ended up in a ridiculous story. Luckily enough, the manga had none of that bullshit and continued on its merry way. Picking on that, another anime was started, Fullmetal Alchemist Brotherhood, which was supposed to delete from our memory the shame of the ending of the first anime. It is now pretty close to ending itself.

My opinion about the whole story is that it was a pretty imaginative concept, a kind of alchemic steampunk universe, filled with wonder, horror and fun stories. I hope you Read/watch it with just as much fun as I have.

Update 4th of July: The anime (Fullmetal Alchemist: Brotherhood) has also ended. It covered the exact same things as the manga this time.

I also forgot to mention that the story ends with a few loose ends: Al goes to explore the East and learn Alkahestry, accompanied by the two chimera men that want their original bodies back as well; Ed is going West, trying to learn as much as possible so that he can return and complete his brother's research and then help people together; Mrs Bradley is raising the last homunculus, Selim, as her son, trying to infuse him with love and make him a good person. These three threads can lead to a possible continuation of the Alchemist story. At least, I hope they do.