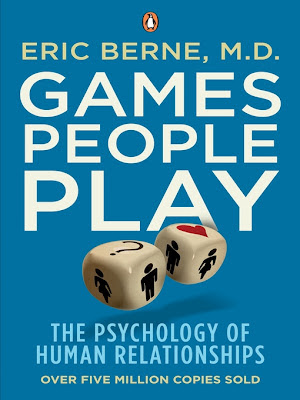 Games People Play: The Psychology of Human Relationships is a sort of summarization of previous works by Eric Berne, the "father" of Transactional Analysis. It was written in 1964, but it is very actual (barring some author views that could be construed as not politically correct in this age of sensitivity). In fact it felt to me so to the point, that I am asking myself how come I've never heard of this book before.

The idea of the book is that all people are torn between their three major components:As I see it, is a separation in things one learns from others, things one thinks for themselves and things one likes or dislikes. At the end of the book the author resorts to a similar division: the Jerk, the one that does everything based on what others would think of them, and the Sulk, the one that does everything in order to demonstrate to themselves and others that they are being mistreated by the world and they are justified in their feelings, similar to the Parent and the Child.

Then there is a presentation of Transactional Analysis, an area of psychology that feels more like economics applied to human beings, where people do things in order to settle debts or gain profit. A nice example is two people that work together and say "hi" to each other in passing whenever they meet first in the day. This is equivalent to settling a debt that each have for their level of relationship. If one of them fails to say "hi", the other will feel attacked, just as if one of the two would stop and say "well, hello! How are you?" which would also feel like an attack, one that indebts the other. These transactions are being categorized into simple transactions, pasttimes, etc.

But then the interesting part comes up. It is funny, I felt for the entire length of the read that the chapters are in the reverse order. Each chapter was more to the point and more interesting than the first. I would have organized the book starting from the introduction, then reversing the remaining chapters. The interesting part is about games, which seem like normal transactions, only they have an alternate "tricky" purpose, one that is not obvious to both people in the transaction.

Quite annoyingly, many of the games described in the book apply to the reader. One feels exposed while reading it. With a structured list of these games, one can use the book as a reference to be used for further study. Each game is presented with their purpose, their "thesis" or pretext and expectations, their actors and their "antithesis". A clear warning is sent by Berne, though: the antithesis of a game is just a way to shortcircuit it and refuse to play, not a "solution" for the problems raised by the playing of said game. Indeed, when faced with a person that refuses to play or, worse, blocks their own playing of the game, they become anxious, depressed, maybe violent, depending on how "hard" they play the game.

An interesting ending is the listing of the reasons why games exist from different standpoints: social, personal, emotional, etc. The games are learned and, in that sense, inherited from parents, then from the environment. People that play the same games stick together and people that play different games are growing apart. That pretty much explains why people that come from the same settings get to have the same social standings and work and live in the same world. Sadly, it also explains why social cases need to make enormous efforts to be accepted, to "make it".

Also, the author presents his view of the best psychological mindset, the one he calls Autonomy. It requires three ingredients: Awareness, to be able to see your surroundings as they are, not as you were taught to; Spontaneity, to be able to have access to your own thoughts, unfiltered by other mechanisms; Intimacy, to be able to share what you are, as you are. A kind of a Zen philosophy. He reckons anything less is not quite living, but only going through the motions. I am not sure how I feel about this, right now.

For me, the book was very interesting. In truth, I should reread it, or at least summarize it into a logical schema that I would add to this post. I am not sure I will do that, but I intend to. Afterwards, I would use it as a tool for introspection and for analyzing my interactions with others. Yes, but...

<p>I read this book as a teenager years ago. The first games aI could identify with were: Brown Shirt, and Alcoholic. As time went by, I identified other games people were playing.<br><br>What I mostly got out of the book is almost all of us play games. Even people who do not like these games play their own, 'I don't play games', game. That was an eye opener when I realize that was a game all its own.</p>

I read this book as a teenager years ago. The first games aI could identify with were: Brown Shirt, and Alcoholic. As time went by, I identified other games people were playing.<br><br>What I mostly got out of the book is almost all of us play games. Even people who do not like these games play their own, &#39;I don&#39;t play games&#39;, game. That was an eye opener when I realize that was a game all its own.

<p>I am glad you liked the Checklist Manifesto. I've added your book to my to-read list. Thank you!</p>

I am glad you liked the Checklist Manifesto. I&#39;ve added your book to my to-read list. Thank you!