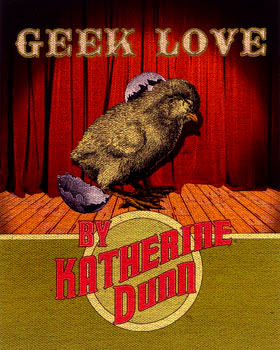 Geek Love is another title that mislead me. Geek, in this book, refers to the original definition of the word "A carnival performer who does wild or disgusting acts" and not a cool lovable geek as myself. The subject is "controversial": the life of an albino hunchbacked dwarf woman as a member of a carnival family.

There is a lot going on in the book. Carnival people poison themselves in order to make their children as freaky as possible. Said children are then raised only if they are strange enough. The failures are either preserved in glass jars if they are too mutated, or given away if they are too normal. The successes range from the main character, to a sociopath hairless cult leader with flippers instead of members, to siamese sisters that have the same lower body to a telekinetic God like child who only wants to be loved and gets manipulated into doing stuff for others. The sisters later give birth to a grotesquely obese child, fathered by a man with half his face blown up who squirts inside their vagina in his death moment. The death and the face blowing are unrelated. There is more, like a rich heiress who pays beautiful women to mutilate themselves in order to have a better life, unencumbered by the sexual desire of her subjects or of the people surrounding them.

The book itself was pretty innovative, but rather boring. If I had an alternative, I wouldn't have finished it, but as I had not, I am a bit proud of having finished it. If nothing else, the book is strange enough to be interesting. Also the writing is pretty good, introverted, taking the reader inside the mind of a person who considers normal people too bland and treasures her deformity and that of her daughter, fathered through telekinesis with the sperm of her brother.

Don't get me wrong, it was not painful reading the book and I do not regret having reading it. However I wish there was something more interesting in the story other than the strangeness of one's thoughts.

There are books that are worth reading and I have my own favorites that I would not mind reading over and over.