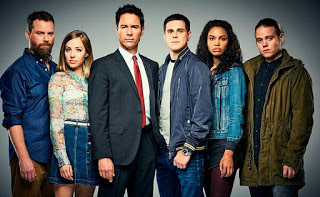 There is this TV show out there, called Travelers, already well into its second season, that no one seems to be talking about. It's not based on comic book characters, it is actual original content (gasp!). It's Canadian, of course. With no flashy budget and subtle acting, it manages to slip through some ingenious ideas. For one, it is the only show I've seen so far where humanity's fate is controlled by a benevolent artificial intelligence, something I feel it is inevitable.

Groups of people are being "directed" to do things, using the huge computational resources of the AI called The Director and the convenient fact that it resides in the future. Its role is to change the past as to avert the horrible future humanity got to. So called Travelers are being sent to inhabit the bodies of people in the present, essentially killing them and taking over their lives. Very interesting dynamics based on the merging of the traveler personalities and the connections of the people they replaced, too. Considering changing enough of the past would change the circumstances that created The Director, it is a fine line that the show needs to thread. I also find it amazing that a show involving time travel can actually be good, considering most stories break horribly when exposed to the cheap time travel stuff they usually employ for movies and TV.

The cast is great, too, with talented actors in strong roles. You probably know Eric McCormack, Patrick Gilmore, Jennifer Spence or Leah Cairns, but all the others have shows to their belt. The individual episode stories feel fresh, too. They could have gone with the tired storylines of the "team" that solves problems used in a zillion shows before, but instead they go their own way, with a different feel that reminds me of European sci-fi, rather than American.

My recommendation is to give it a go, watch a few episodes, see if it grows on you. It is not something that people see a few scenes of and fall in love, but something that needs a bit of a grind before you become a fan. It is worth it.