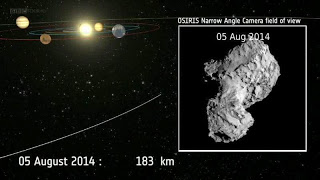 BBC's show The Sky at Night did a coverage of the Rosetta mission, called How to Catch a Comet. It is the standard popular science show, with a lot of fake enthusiasm from the reporters and simple language and explanations, but for people who read this blog entry and wonder what the hell Rosetta is, it does the job. The fat black reporter is really annoying, and not because she's black, but because she feels completely fake whenever she says anything. Other than that the show is decent.

You get to learn about comet 67P, the Rosetta probe features and mission, walk around ESA, talk to scientists and even see a how-to about photographing comets - it was funny to see a shooting star in the night sky while the guy was preparing his camera and talking in the video. Of course, for me the show stopped just when it was getting interesting. I know you can't do much in 29 minutes, but still. I hope they do follow-up shows on Rosetta and I can't wait for November when the lander module will try to grapple the comet and land.

Just in case I've stirred your interest, here are some links that can cover the subject in a lot more detail:
ESA Euronews: Comet Hunters: Rosetta's race to map 67P - 8 minutes and a half of Euronews report from 11 August.
ESAHangout: How do we journey to a comet? - Google Hangout from ESA explaining the mission. It's one hour long and it dates from the 26th of June. Many other videos about Rosetta can be found on the ESA channel.
A playlist about Rosetta from Mars Underground. The most interesting is this video, published on 11 Aug 2014. It lasts an hour and a half and shows the first mission images and science results.
Comets - A wonder to Behold, A continuing Stream of Surprises - The Beauty and the Danger, not about Rosetta, but one hour and a half about comets. The documentary is trying to justify a controversial theory about the electric nature of comets. It is well done with a lot of proof, but I know too little about the theory so I can't recommend it. Interesting, though.