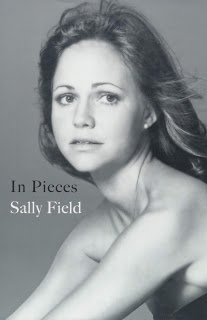 In Pieces is a nice read. It made me understand things about people and women in particular that I had no chance of knowing because, let's face it, all people lie about themselves and films lie about everything. Sally Field is both very honest (I mean the effort is palpable) and narrating her own version of the story of her life. Can you trust it? Can she trust it? Before you ask how did she remember what she did as a young woman when she wrote the book at 71, learn that she obsessively kept daily journals about her life. She kept reviews to her films, random pictures of her on the filming set or with her family, letters and so on. Funny enough, she never read the reviews until much later. I think that was wise. If this post were printed, she probably would keep it, too.

The book starts with Field's childhood, described as a continuation of the lives of her mother and grandmother, goes through her personal and work life until she is about 40, when she wins the Cannes Palme d'Or and the Oscar Academy award (her first) in the same year. I feel like she thought that was the peak of her life and the next twenty plus years (and a new marriage and a new son) are described in mere paragraphs. However the ending is very emotional as she tells the story of coming to terms with her emotional issues, going to a psychologist for the first time and finally talking frankly with her mom - at the age of 63! It's never too late - and ending with her mother's death.

I loved the way she explained how the different pieces of her soul worked, hence the name of the book. I usually say what I mean and even if I am plagued by many personalities of my own, when I am duplicitous I usually planned and made a huge effort to do it. It must be the same for most other men, I think, because in our discussions we often decry the seamless way in which women can become someone else entirely, hide and basically cheat when interacting with others. A 2015 study on 2000 people showed that women lie about two times more than men, but an overwhelming majority of lies were told in order to make someone feel better, to avoid trouble, or to make life simpler. However, in Field's bio I have finally understood that sometimes this is not voluntary, it is a defense mechanism, it is something you learn from childhood when you have to be the nice little girl and fit in and still face cruel reality. A person can be open and social while at the same time being shy and introverted. It's not somebody being duplicitous, it's someone exposing the part of themselves that they feel will fit in. Of course, that's her take on it, but I dug it.

Bottom line, I think it was a lovely and informative book, even if it described child sexual abuse, matter of factly sexual harassment in the film studios, dysfunctional relationships with men that needed sexy stooge caregivers, not partners, and psychological dissociation in order to survive through it all (and act brilliantly). This is the second actor autobiography I read, after Peter Coyote's (which I highly recommend), and I loved both of them. Perhaps this is a genre that appeals to me because actors are taught to connect to their emotions and to become different people while staying aware of their true core, and so their autobiographies are more detailed, more personal. I will read more of these.