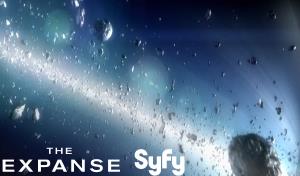 I have always been bad mouthing the Sci-Fi Channel, later, after 17 years, renamed to SyFy, as if they wanted to distance themselves from the genre they were supposed to promote. Why? Because I was born in Romania, a place of rancid communism and cultural isolation. After the Revolution, Romanian television stations were scarce in showing SF, and when they did it was always if there was nothing "better" to show, like sports or stupid peasant comedy shows. I grew up with science fiction books and a thirst for sci-fi movies and series. All this time I was dreaming of these foreign channels that I've been hearing about. Amazing to think that there was a SciFi Channel out there, where they were showing sci-fi all day long!

Of course, the reality of it is that science fiction only recently started to pay off. While I was dreaming of a channel that was all Star Trek, Babylon 5, Farscape, BSG, even Blake's 7, showing all new SF movies in the interim, the truth was less than stellar. They were showing crappy, mass produced, cheap programs that was all they could afford. Many of them were reality TV. I wasn't actually able to ever watch the SciFi Channel as a television station, anyway. But I have had contact with other similar ones and I was not impressed. So I judged them by their productions, stuff like Sharknado.

Lately though, I feel like I have to swallow my disdain, after they started doing really interesting stuff like Z Nation, which may be low budget, but well written: exactly what I have been waiting for from the Internet, but failed to materialize. Since writing should be the smallest effort in a show, I expected it to far outweigh production values, but until now, I have rarely seen stuff like that. After loving Z-Nation, now they started with a TV adaptation of The Expanse book series and it is amazing!

A well thought out universe in the near future, where the Solar System has been colonized and the three political entities are Earth, the Asteroid Belt and Mars, locked in an awkward standoff of military and economical influences. The show has really good effects and its attention to details, no doubt coming from the book, but well translated to TV, is great! The African ethnic influences on the Belter culture, the East-Asian preponderance in Earth leadership and the weird mixes of cultures all over, are really cool, but what I appreciate to no end is the realism of the space technology. There is a little inadvertence between script and reality, of course, but most of the stuff in the first 4 episodes is really believable (meaning it is achievable within the science and resources that we know today). The characters are deep and interesting, their interactions weaving together and apart in a very well coordinated dance.

But what I like about The Expanse more than all the production values, great writing and complex characterization is that it is a courageous enterprise. While I was watching it with my wife she was constantly pestering me with questions about stuff that she didn't understand. This, for once, is not a lowest denominator kind of show, it is hard sci-fi for hardcore sci-fi fans! And well done enough so that even on and off fans like my wife would be able to appreciate!

To summarize: watch The Expanse. I have high hopes for it!