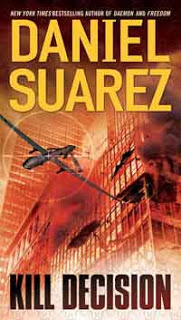 Not as complex as Daemon, Kill Decision still manages to impress, thrill and terrify with the very believable subject matter. As for the other two previous books by Daniel Suarez also covers the subject of technology disrupting the political and economical makeup of our society, this time focusing on unmanned autonomous killing drones and it also draws ideas from multiple very real and very interesting scientific fields.

I don't want to spoil anything, but it is mostly a book about the good underdogs fighting the all powerful bad guys, so in that sense it is most like FreedomTM than Daemon. It doesn't have a twist in the middle of the story, either, changing the perspective of the subject matter, it is a simple and by the book (pardon my pun) technological thriller. Perhaps that sounds a little disappointing, but it was a fascinating book and I finished it in mere days while also travelling abroad and visiting Italian cities.

I highly recommend it, not so much for the story directly, as for the multitude of subjects it touches, the sense of eye opening knowledge and the terrifying feeling that everything that happens in the book is not only realistic, but possibly happening as we read.