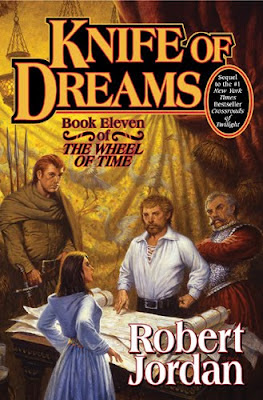 Knife of Dreams is the last book in the series written by Robert Jordan. He died after finishing it. It was one of the nicer books in the series, mostly because it prominently featured Mat, who is one of the few characters in the Wheel of Time series I can empathise with.

The obvious and unnecessary story arch with Perrin's wife abduction by the Shaido Aiel finally ends, Elayne, Egwene and Nynaeve are all acting like they know everything and some get abducted by the Black Ajah and the White Tower, only to deny any wrongdoing or link to the cause of their predicaments. Cadsuane continues to be a pain in the butt, without actually providing a good return of investment and Min is either worrying without cause or acting stupidly and precipitating harm to Rand. Aviendha is not much better, but she rarely appears in this one. In other words, all the women are pompous idiots in Knife of Dreams, while Rand and Perrin act like buffoons. So the only satisfying story arch remains that of Mat.

I've started to read the last three books, which the new author (working on the basis of very detailed notes left by Robert Jordan and big fan of his) points out are three pieces of the same story, only one larger than a single volume could have contained. After that, I am free of the Dark One and the taint will be gone!