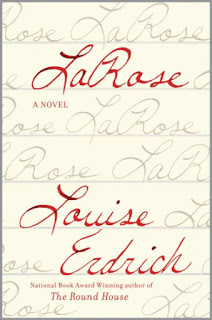 The quote So what's the moral of this story? - Moral? Our stories don't have those! perfectly describes the narrative of LaRose. The book is well written, there are a lot of very well described characters that go through their own arcs that intersect often and in uncommon ways, but you are just left with knowing a bunch of people better than before you began reading the book.

Louise Erdrich describes an intertwining world of traditions, history, real life, strong emotions, cool heads and above all, the feeling that it all somehow makes sense (without it actually reaching that point). It could have easily been completed at the middle of the book or continued for a few more volumes, it lacks finality, with the last chapter feeling forced in the way that it tried to complete some concepts. I can imagine Woody Allen saying "It involves Native Americans" after reading it for twenty minutes.

Given what I've said above, it's difficult for me to rate such a book. I enjoyed reading the words, but did not enjoy the book. I ground the words into submission with the whole intention of finishing the story and then reading something else. I loved the characters, even if the myriad of details about them did not interest me in the least. I learned about a people that is, as the book itself recognizes, rapidly going extinct. Is this a good book? Yes! Would I have read it if I knew what I know now? Probably, because I am vain like that. Should I have read it? Probably not.

Bottom line: I will rate it above average, because it most obviously is, but that's about the only reason.