It is about time to revisit my series on ASP.Net MVC Core. From the time of my last blog post the .Net Core version has changed to 1.1, so just installing the SDK and running the project was not going to work. This post explains how to upgrade a .Net project to the latest version.

Pressing the batch Update button for NuGet packages corrupted project.json. Here are the steps to successfully migrate a .Net Core project to a higher version.


Code after changes can be found on GitHub

That should do it. For detailed steps of what I actually did to get to this concise list, read on.

Downloaded the source code from GitHub, loaded the .sln with Visual Studio 2015. Got a nice blocking alert, because this was a .NET Core virgin computer:

Of course, I could have tried to install that version, but I wanted to upgrade to the latest Core.

And here I went to Announcing the Fastest ASP.NET Yet, ASP.NET Core 1.1 RTM. I followed the instructions there, made Visual Studio 2015 load my project and automatically restore packages:
I got to the second step, but still got the alert...

... so I commented out the sdk property in global.json. I got another alert: 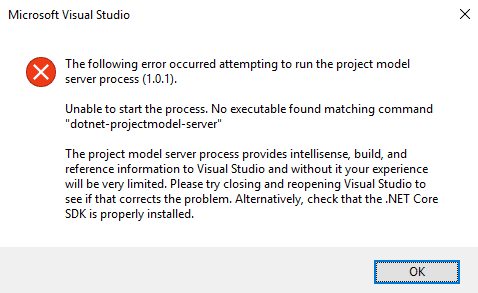 TL;DR; version: do not uninstall the Visual Studio .NET Core Tooling
I also had "Microsoft .NET Core 1.0.1 - VS 2015 Tooling Preview 2" which I uninstalled for good measure and it took forever. Opening the solution afterwards just showed the project as (incompatible) so things are getting worse! Perhaps uninstalling the tooling was not a good idea. Searching for them leads me to a link for Visual Studio 2017 only, telling me that Visual Studio 2017 has the .Net Core tooling included. Well, thanks, but I have Visual Studio 2015! Just downloading and installing the tools again doesn't work, because they were included in the VS 2015 Update 3, which is still installed. The solution can be found here: Microsoft .NET Core 1.0.0 VS2015 Tooling Preview Update 2 fails to install with Error 0x81f4000: how to fix it. Short story shorter: run the installed with the SKIP_VSU_CHECK=1 parameter in command line. If Visual Studio tells you to upgrade the tooling after install, do it.

And then... got the same No executable found matching command "dotnet=projectmodel-server" error again.

I created a new .NET core project, just to see the version of SDK it uses: 1.0.0-preview2-003131 and I added it to global.json and reopened the project. It restored packages and didn't throw any errors! Dude, it even compiled and ran! But now I got a System.ArgumentException: The 'ClientId' option must be provided. Probably it had something to do with the Secret Manager. Follow the steps in the link to store your secrets in the app. It then worked.

Step 1.1 (see what I did there?) - continue to read the Microsoft documentation

The third step in the Microsoft instructions was removed by me because it caused some problems to me. So don't do it, yet. It was
Since I had not upgraded the packages, as in the Microsoft third step, I decided to do it. 26 updates waited for me, so I optimistically selected them all and clicked Update. Of course, errors! One popped up as more interesting: Package 'Microsoft.Extensions.SecretManager.Tools 1.0.0' uses features that are not supported by the current version of NuGet. To upgrade NuGet, see http://docs.nuget.org/consume/installing-nuget. Another was even more worrisome: Unexpected end of content while loading JObject. Path 'dependencies', line 68, position 0 in project.json. Somehow the updating operation for the packages corrupted project.json! From a 3050 byte file, it now was 1617.

Suspecting it was a problem with the NuGet package manager, I went to the link in the first error. But in Visual Studio 2015 NuGet is included and it was clearly the latest version. So the only solution was to go through each package and see which causes the problem. And I went to 26 packages and pressed Install on each and it worked. Apparently, the batch Update button is causing the issue. Weirdly enough there are two packages that were installed, but remained in the Update tab and also appeared in the Consolidate tab: BundleMinifier.Core and Microsoft.EntityFrameworkCore.Tools, although I can't to anything with them there.

So I tried to build the project only to be met with yet another project.json corruption error: Can not find runtime target for framework '.NETCoreAPP, Version=v1.0' compatible with one of the target runtimes: 'win10-x64, win81-x64, win8-x64, win7-x64'. Possible causes: [blah blah] The project does not list one of 'win10-x64, win81-x64, win7-x64' in the 'runtimes' [blah blah]. I found the fix here, which was to add to project.json.

It compiled. It worked.